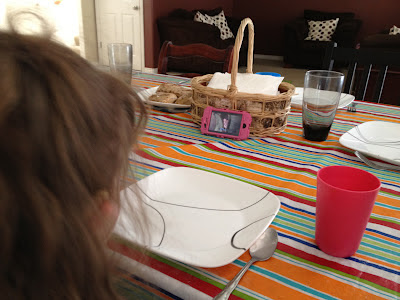 Whitney got me thinking about intelligence again the other night.  I've written about IQ testing before and how I don't necessarily agree with the testing methodologies used.  So much is riding on the ability to communicate ideas rather than actually having them.  Whit struggles a lot to get what's going on in her head across to someone else.  But that doesn't mean she doesn't have a lot going on in her head.

A better way I've been watching and learning about Whitney's intelligence is through her problem solving skills.  Seeing how she takes care of things she needs helps me see just how sharp my little girl is.  Here's a fun example from a few evenings ago:

Whitney was watching a cartoon when it came time for dinner.  She watches a lot of cartoons on her phone (yes, that phone) and when it was time to sit down at the table, she knew she'd need something to prop it up while she ate.  I could tell she was up to something because you can almost watch her think.  She was looking around the room.  Then without any help, she wandered over to the kitchen counter, picked up the basket we use to hold napkins and took it over to her spot at the table.  As she sat down, she carefully propped her phone up against the basket so she had hands-free viewing of Toy Story while she ate.

Normally, I'm a fan of no technology at the table, so we can actually converse while we eat.  But I was so proud of Whitney solving her own little problem that she got to finish a bit more of her cartoon while she ate that evening.  Well done, little problem solver.
Posted by Nate at 12:21 PM

Love it! Whitney is one smart little girl! Our kiddos are a lot smarter than we give them credit for. You and Melanie are inspirational, dedicated, and loving parents! You can see the love in Whitney. She's blossoming into an amazing, beautiful and loving girl. Thanks for giving us lots of hope and inspiration for our Kaylee!

Thanks, Sherry! You're so kind. It's good to hear from you. We hope your family is doing well. Whit sends a big hug for Kaylee.