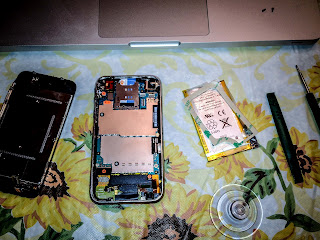 Many of you have read about Whitney using assistive communication software, called Proloquo2Go, on Apple's iOS in order to communicate with people who don't sign.  Around the house, Whitney often uses the software on Melanie's iPad.  But there's no way we'd let Whit out the door for the day with such an expensive and fragile piece of equipment.  For that dirty job Whitney has her own hand-me down iPhone 3GS.  And she uses it non-stop to communicate, listen to her favorite songs and more.

Unfortunately for us, that rugged little phone is nearly three years old now and its battery was beginning to show its age.  About three weeks ago it dropped below an hour of life between charges.  Melanie and I were not thrilled with the idea of having to spend a bunch of money on a new device just to have it go through the beatings that everyday life with Whitney brings.

Luckily I discovered a way to repair Whitney's phone.  The folks at iFixit.org supply replacement parts, tools and detailed repair guides for all kinds of consumer electronics and I picked up a replacement kit for Whitney's iPhone battery for under $25.  The repair went smoothly and when I told the iFixit team about what I had done, they featured little Whitney's phone on their blog.  You can read about it here: http://ifixit.org/2080/fixing-my-daughters-voice/.  So now the battery in Whit's old phone goes a long way and the cost to repair it was minimal.  Thank you, iFixit for all your help!

I wish the story ended there though.  But instead I'm sad to report that Whit's phone took a bath today.  Whitney's fascination with running water got the best of her and she dumped that old iPhone in a drinking fountain.  As soon as Melanie saw what happened, she turned the waterlogged old thing off and stuck it in a bag of rice.  It's still in the bag drying out, so we don't know if it's totally dead or just mostly dead.  If it's only mostly dead, I'll be turning to my new friends at iFixit.com for more repair instructions and parts. And that, my friends, is what you call an adventure!  I'll be sure to let you all know soon if the phone survived.

Update: The phone lives!  After two days in a bag of rice, I took the phone out and charged it up.  It turned on and continues to run great.  Considering how much water that little thing took on in the drinking fountain, I'd say it's a miracle.  But I'm not going to tempt fate.  A rugged new Otterbox Defender case, with plugs for the headphone jack and charging port, arrives tomorrow.
Posted by Nate at 9:34 PM

I guess there's no waterproof iPhone app. I speak from experience, after I dropped mine in the pool.