As a parent of a non-verbal child I've become familiar with some interesting alternative forms of communication. Melanie and I have done the sign language thing with Whitney with quite a bit of success. But sign language doesn't get Whitney very far outside of the family. Melanie and I have felt like Whitney may need something new to communicate with and make friends with kids her age.

And so we've been learning about assistive communication devices. Basically, they are electronic boxes with varying numbers of buttons that each speak a word or phrase. And in fact Whitney has been using one device called a Go Talk 32 since January.
Go Talk devices are made by the Attainment Company. They've been around since the 70s building and selling things like this to help people communicate. Today, $330 can purchase a Go Talk 32. It's capable of being programmed to say 163 different phrases so long as they fit in the 27 minutes of recording time available. Each phrase is mapped to a picture in a grid laid out on sheets of paper. The sheets of paper are then inserted into the side of the device to create the buttons you can see in the picture. The Go Talk is made of durable plastic, has a carrying handle and runs on a couple of AA batteries.
In the time that Whitney has used a Go Talk she's been limited to a single sheet at a time unless someone changes it for her because the sheets are too difficult to change by herself. Her teacher has felt like Whit is limited in what she can say, and has gone off looking for other solutions. Simply put, the Go Talk is inexpensive but is not flexible enough to say what Whitney would like to. 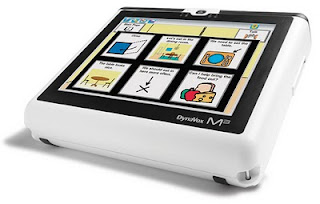 Which brings us to the new device that the school sent home yesterday. This monster is the DynaVox M3. It replaces the troublesome sheets of paper with a touch screen that presents images on buttons that represent phrases. The hope is that this device will will allow Whitney more flexibility in her communication. Its manufacturer, DynaVox Mayer-Johnson, also reports that is can interface with the internet and various telephones. This is all well and good, but the M3 weighs almost five pounds and has a six hour rechargeable battery. That's right! It weighs more than a half gallon of water and it won't last much past lunch time without being plugged in! So for at least those two reasons Whitney can't even carry the thing around with her. Not what I'd call liberating. Oh, and it costs $3,955 depending on the dealer you purchase one from. So even if your insurance covers the device, an 80/20 coinsurance split makes a family's cost $791 plus applicable taxes. This device is what I'd call a Total Fail for my little girl.
I don't rant often because I don't feel it does anyone any good. But just in case the manufacturers of these devices and similar ones drop by, can I just say, seriously?!! These things are too limiting or they are too heavy and most of all too expensive for what you get. You are failing the individuals you are trying to help. Go back to the drawing board or get out of the hardware design business altogether! There I feel better.
A number of families in our support group have started a new approach to assistive communication. Get the hardware from one vendor and the software from another. In fact, there's someone who builds svelte touch screen hardware that costs a bit less than the M3 even after insurance. It weighs a shade over a pound, has a battery that lasts over 10 hours and is a third of an inch thick. You guessed it, the Apple iPad. Sure. You'll need a sturdy case, but even then, it'll be lighter then a jug of water.
Then you just need some software. And it's got to be good software. Many parents are raving about Proloquo2Go. It ships with 8,000 pictures and phrases and can be expanded to include more. It runs on the iPad or even an iPod Touch to be more portable. Proloquo2Go partners even sell the hardware and software together in bundles. That sounds pretty good.
This combo may not be the perfect solution for everyone. In fact I'm still concerned about a few things with Whitney. Will it be too complex for her to learn? Will a good case be enough to protect an iPad from the rigors of first grade? And will she end up playing Angry Birds instead of listening in class? I'll make sure we post the answers because I think this is the route we're looking to go for Whitney's future communication needs.
Posted by Nate at 11:33 AM

We definitely understand your frustration. You know we went ahead with a hefty, super expensive device that we were very fortunate the state provided. It has been very hard, much harder than we anticipated, to implement. We still don't know how we feel about it. Mostly, we hate that the "voice" sounds like a robot when we hear i-phone apps that sound like real children's voices. We are toying with the i-pad/proloque combo iedea too.

Sometimes you just have to rant. And who knows, maybe someone who works on these devices will actually listen. We have started looking into this as well because while Zoe is able to speak freely with us and the few people who know her well, she is limited when meeting new people and interacting with peers. And she has so much to say! And yet these devices just seem so limiting.

Hmmm, perhaps the maker of the 6 pound device thinks that your child only needs to communicate six hours a day?

I too avoid ranting but sometimes it needs to be done. I actually just got finshed posting a rant on Zoe's blog and it included our frustration with the augmentative communication program we have been in contact with.

Let us know how the Ipad works out- we'll be interested to hear.

Maybe you can just get the Dynavox and a really really really long extension cord : ) Keep on ranting (sometimes, anyway )
-we share your feelings and it is comforting to know that there are others out there that share our frustrations. And maybe, just maybe, help us all find solutions. We'll be watching to see if the whole i-pad thing works out with great interest.

Thanks for all the encouragement! Love the idea of a big ol' extension cord. That makes me laugh out loud. Melanie tells me Whit's class at school got a grant for an iPad and software, so she'll be trying things first there. If it goes well we'll invest in something like it for home. I'll keep everyone posted on her progress.

Hi We are at cross roads of communication devices right now too. NeVaeh has perfected her GoTalk and Hip Talk. The school actually bought a Ipad and is working on it with her. I am scared of the durability but think it may be the way to go. She has a while before she can actually functionally use it for communication Though. Here's a link I found on what appears to be a good case. http://www.rjcooper.com/ipad-ultimate-case/index.html Best of luck Patti

Hi Nate, I'd love to contact you re' your blog. I'd be most grateful if you would contact me at dave AT specialkidsintheuk.org