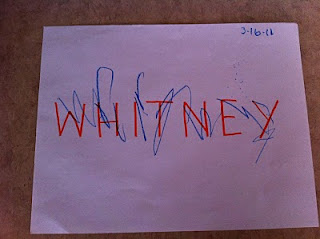 Melanie and I got to sit down recently for a parent teacher conference. Whitney's teacher gave us a bunch of updates that mostly made us really happy. For starters, Whitney has continued to blossom socially with the other kids. She's made friends with a group of several kids in the typical class that all like to come and find Whitney at recess and like to help her go play.
Whit's also made a little friend in her cluster class. She's a little girl in a wheel chair that sits at a desk near Whit. Whitney usually greets her with a special hug when they all arrive for class in the morning.
Academics are much harder to measure due to Whit's being non-verbal. The teachers feel Whitney recognizes quite a few sight words but they don't know how many because she can't always sign the word she sees even when she knows it. Whitney knows her letters, but her spelling skills are untested because she really can't write yet.
But she is improving. Melanie and I were nearly brought to tears when we were told they can hand Whitney a crayon and a piece of paper with her name written on it and Whitney will focus enough to be able to trace the letters of her name without any additional help. This may not seem like a big breakthrough, but trust me. It's a big deal. Whit used to show no interest in writing or drawing at all.
Potty training is really going slowly. The aides take Whit to the potty every half hour to an hour, but Whitney's still not showing much interest. Occasionally, she'll be dry when they take her and they reward her for that, but it's going to be a while.
Whitney's Go Talk speech device is proving to be very limited for the things they'd like her to be able to say. We're working with the folks at school to come up with a better solution. We all feel like Whit has got a lot on her mind, but can't express it well with the tools we've given her so far.
We had actually hoped that Whitney would be in the same classroom with the same teachers again next year, but looking at class sizes and Whit's progress, she'll be moving to the other cluster class at her school. Melanie and I have mixed feelings about this because things have gone so well this past year, we're told the new teacher is also excellent and we'll look forward to meeting her and the aides this summer.
Posted by Nate at 11:43 AM

Watching all our kids progress is a lot of fun. I don't comment as often as I should, but I do keep tabs on everyone's blogs. It's exciting to see Whitney progress. Misha starts mainstream next year. I will be interesting to see how it goes.

Thanks Josh! Good to hear from you. Misha will do awesome in mainstream school. He's doing so great. It really is amazing to see what our kids can do.

Bless your sweet Whitney!
This post touched a place in my heart as it is so familiar to my own experiences with my son. I received my first mother's day card from ds and he wrote his name almost legibly and I cried tears of absolute joy :D