Screaming on the Bus 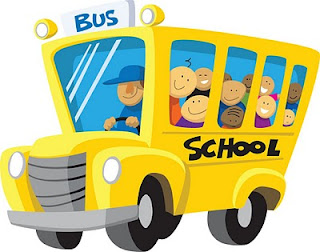 Sometimes individuals with special needs will do things in public that make "normal" people feel a tad uncomfortable. This has happened with Whitney on occasion and while I've never really been embarrassed, I've recently begun to really find humor in it.
Whitney got a new bus driver a couple weeks back. He's a nice enough guy but he's never driven a route that picks up kids for special needs classes. Needless to say he's had a few new experiences over the last couple weeks.
One day when the bus picked Whit up at the house, Melanie mentioned that Whitney enjoys listening to music on the ride to school. It helps pass the time during what is almost an hour ride. The driver was worried about this because he might not be able to hear the kids if something bad happened.
Finally last week the driver realized that the kids were doing great and decided to give the radio a try. Later that day, when he dropped Whitney off at the house, the driver was concerned. He asked Melanie if maybe she could send a toy for Whit to play with on the bus because she had been screaming for most of the ride.
Melanie just smiled knowingly and agreed to send a toy. She wasn't concerned about the screaming because we know Whitney loves the bus. She's told us so on several occasions. The screaming the bus driver had heard was actually Whitney happily singing along to the music on the ride home.
Posted by Nate at 4:39 PM

We just wanted to thank you for blogging. Our son was recently diagnosed and we were given zero information about the syndrome nor is there any specific support organisation here in Ireland. While researching it we came accross your blog and it really helped us to become excited again about our little fella's future and his life that we are so lucky to be part of. We were inspired to start writing our own blog and I hope that one day maybe it will be a comfort to other parents out there, as yours has been to us. Our blog address is uisneach-1p36.blogspot.com

Miriam and Michael, your are very welcome! We love sharing our story with others and we're looking forward to reading about yours as well. If you'd like to meet other parents of 1p36 kids, we have a community of us at 1p36dsa.org as well. Welcome to the 1p36 family!