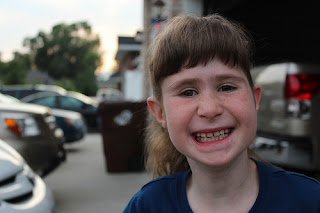 I've written about potty training seven different times over the years.  The first time was six years ago.  Melanie and I have worked with Whitney off and on since she was three years old.  Usually our efforts end in frustration for us all.  In fact, things were so difficult that this past spring, at the age of nine, Whit was actively avoiding using the bathroom.  So we kind of threw our hands in the air for most of this summer.

Then Melanie decided to give the whole thing another push before school started.  She used the wearable moisture alarm we had from previous attempts and some padded underwear to make accidents less of a worry to clean up.  The alarm actually helped Whit recognize what her body was doing and learn to hold it until she could get to the bathroom.  That was a huge help.  And pretty soon she was even telling us when she needed to go.  It's been a couple of weeks now and Whitney is down to having just one or two accidents a day most of the time.

I think the main reason we're now having some success is that Whitney made the decision that she wanted it.  Before, she wasn't interested or she was even actively fighting it.  But now she tells us when she needs to go and patiently waits until we can get her to a bathroom.  Other times, her alarm goes off and Whitney realizes it and comes to find us.  It's been a long time coming but we're cautiously excited that this might finally be the time.

School has just started back up now and we're hoping the potty training will just become part of Whitney's normal routine.  So far she's ridden the bus to and from school without accidents and everything.  Our fingers are firmly crossed that this will continue.
Posted by Nate at 12:23 PM

Sounds like time for a celebration. Good on ya, Whitney!

Thanks! We're kind of being cautious before we celebrate too much. This has been a long road. But things do really seem to be working out this time.