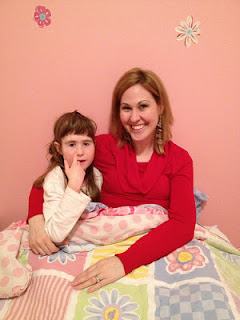 Sadly, this topic has nothing to do with a new method to make diapers more pleasant or less smelly.  Diaper conditioning is actually what happens when a child is fully capable of controlling the need to use the bathroom, but refuses to because they actually prefer just going in their diaper.  In some kids' case it's less of a preference thing than it is a habit that forms and makes potty training much more difficult.  I bring it up because this is the battle Melanie and I are fighting with Whitney right now.

We do things a little differently in the Hanson household.  If you read here regularly, you've probably already noticed that.  And now we're potty training our oldest last.  Or maybe I'd be more correct in saying we're potty training our oldest, still!  We've tried at several different points over the years and not succeeded.  Without great communication with Whit, it's tough to know exactly why things haven't worked out.  She definitely knows when it's time to go.  But she won't tell us.  And that gets me back to diaper conditioning.  Whitney likes the diaper better.

The last few weeks while Whitney has been off track from school, Melanie has taken a few hours a day and done some intense potty focus with Whitney.  She sets a timer for every 5 to 10 minutes and asks Whit if she needs to go.  Then she checks if Whit is still dry.  After a certain number of dry checks, Mel takes Whit in to sit on the potty.  Sometimes Whitney will give in an go.  But more often, she'll hold it for as long as Melanie makes her sit there.  Then she'll go as soon as Melanie puts a diaper back on.

Other times, Melanie will find Whitney hiding in a corner and in the process of going.  She'll rush Whit to the bathroom and stick her on and Whitney will stop the whole process until she gets off and back into her diaper.  Even though she was already going!

Saturday was the craziest experience yet.  Melanie had worked with Whit for several hours and she had refused to go.  So we put a diaper back on (washed our hands thoroughly) and had lunch.  Melanie had gone somewhere and I was home from the kids.  I headed downstairs to check on them and found Whitney wearing the fullest, nastiest diaper I've ever seen.  I knew she'd been changed recently and couldn't figure out what had happened.  Until I considered that she'd been fighting potting training all morning.  Basically, she'd just saved everything up all morning.

So we're battling Whitney's preference for diapers and working with the folks at school.  They've got some new ideas and we'll just have to see what happens.  I try to think of something positive when I'm dealing with some big challenge like this.  Right now, I'm just thankful my other two are past this stage!
Posted by Nate at 2:49 PM

Oh man! That sounds like quite the challenge! You guys do so great taking care of Whitney. I'm sure she will get the hang of it, just not a soon as you would like, no doubt.

Thanks, Alan. It's like so many things. We can help and teach but Whitney has to want to do it. So we'll just try to be patient.

It's so nice to hear another 1p family going through this! We have the same problem with Olivia! She will go #1 in the potty, but "needs" a pull-up for #2. She'll put it on to go, and then come tell us she's poopy. But if we just stop using them, she'll go in her panties. I would LOVE to hear suggestions the school gives you! So far none of our team has been able to figure out a ytjing that works.

We're with you Heather! It's certainly an adventure. Oh, and so the first thing the school recommended is a moisture alarm with a loud siren that goes in her diaper and helps her get into the habit of realizing when she goes. Sounds like a hilarious prank to me, but we'll try it. We'll try anything at this point. I'll make sure to share anything else that comes along as well.

the best thing you can do is don't put her in a diaper at all. She's waiting for a diaper. Maybe tell her they're all gone? Then she will know she HAS to use the potty. I'm a nanny and have potty trained many kids....I know it is different with Whitney. My neighbor kid was diaper conditioned....she held her poop for 5 days until she finally gave in and started using the toilet. Once she used her last diaper, her mom just didn't buy any more. Try it out :)

Heather, try making her clean up the mess after she goes in her panties :)

Good advice, Jennifer. Thanks! We should do do more to keep Whit diaper free. The trick is she's still required to wear one on the bus, at school, etc. And then there's the desire not to ruin all the carpet and furniture in the house. ;-) But even if she'd have a few good experiences using the potty instead of a diaper, that'd be a success for sure!