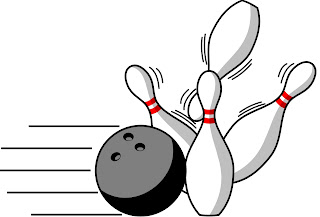 Heading out into public for some family fun can cause anxiety for parents of a special needs child.  I always wonder about how those we come in contact with will react.  And will those interactions ruin a family outing.  People are generally kind but an evening is easily ruined by inconsiderate stares, pointing and questions.  But sometimes people's reactions can absolutely make your day as well.

Melanie and I decided to take the kids bowling for a family activity this week.  I met them after work at a local bowling alley and we proceeded to get our shoes, bowling balls together and head to our lane.  We were pretty early and I was relieved to see that the lanes around us were empty.  Whitney would be free to wander a bit and be herself without getting in the way of someone else's game.

But as we bowled and the night went on, the place filled up.  A family was given the lane next to us.  As they got set up, I could see they were out for a family night as well.  Whitney was instantly in their faces waving hello and trying to honk their noses.  Whitney just loves people.  I explained Whit's disabilities to them and apologized.  But they were kind and said they completely understood.  They had a nephew with autism.

That short interaction would have led to a fine conclusion as we got back to our bowling, but the members of this kind family reached out to my kids.  Anytime Whitney, Liam or Avery finished their turn, this nice family gave them a high five or "knuckles" and cheered for them.  Before I knew it, Whitney and Avery were sitting on the adult daughter, Missy's lap and talking.  Missy complimented Whit and Avery on their cute clothes and hair.  The girls were just beaming.  Melanie and I were able to relax more than we had in a while and enjoy the evening.  This kind family even shared a few nachos with Liam.

When we had finished our last game, I shook the other father's hand and thanked him for his family's kindness.   To them it was no big deal, but this family made our day.  Those without someone in the family who is "different" will likely never know the apprehension that sometimes comes with going public places.  Will people stare?  Will they point or just ignore us?  We've come in contact with so many over the years who are kind and accepting.  And some who even go the extra mile.  I give thanks for that!
Posted by Nate at 12:26 PM

Nathan, you need to do public speaking about this very topic. We are, as a public, not very educated on how to "behave" around folks who are not quite like everyone else. We just need to be taught. Kathy

Thanks! That's a good idea. I've done different things over the years to try and help out in that respect. The main thing is, to help people overcome that reflex reaction that someone out of the 'norm' is to be afraid of or ignored. It's great to hear from you!