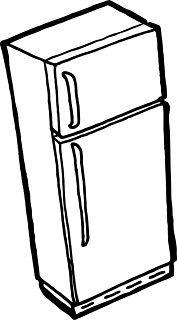 Whitney is determined to do more and more things independently.  Sunday morning while Melanie was getting ready for church and I was at meetings, Whitney decided to try her hand at fixing herself a snack.  She's attempted this before by finding crackers, cereal or something else left out on the counter in the kitchen.  But this time she really outdid herself.  She tugged at the door of the fridge but just couldn't manage to pull it open.  So she tugged at the freezer compartment door above it.  This was a longer reach for her, but because it's a smaller door, Whit managed to get it open.

Once she got the freezer compartment open, she was pleased to find two of her favorite things inside: bologna and dinosaur shaped chicken nuggets.  Both frozen solid of course.  She pulled her loot out of the freezer and headed for the basement where she could enjoy her snack in peace.

When Melanie found her several minutes later, she was relaxing in the family room trying to gnaw through the packaging on the frozen bologna.  The dinosaur nuggets were already open and Whit had apparently eaten her fill of those before Melanie arrived on the scene.  Whitney appeared proud of herself but kind of perplexed about why the bologna was so cold and hard.

Mel put the bag of nuggets back in the freezer and life went on.  Until yesterday, when Whit's little sister, Avery, asked to have some dinosaur nuggets for lunch.  Melanie reached into the bag and pulled out all kinds of headless dinosaurs that Whitney had put back after decapitating them during her snack.

So now we will either need to find a way to better secure the fridge and its contents or maybe I'll just teach Whitney how to use the microwave too.
Posted by Nate at 12:41 PM

Made me laugh. If you do decide you need to secure the fridge, we know all about latches and which are the best. Deacon started helping himself to snacks at a very early age... hence our fridge, freezer and pantry all have locks. If he could figure out how to gnaw through cans the corner cupboard would too :) . -Tina

Haha! Melanie told me you were the lock expert. We'll be in touch about that for sure.

Oh my LOL I am just laughing...sorry but I can so relate!!! The frozen peas...pork chops, raw eggs yes NeVaeh was even crunching raw eggs...LOL. Our fridge and freezer are locked with a Marine lock..it has an adhesive back and is the best ever lock we ever found. Nothing else would ever stop her but this NeVaeh has tested with all her mighty power! Its available on Amazon too. Best of luck!! http://www.ebay.com/itm/Refrigerator-Lock-Easy-Installation-7-Colors-Available-/310300491396?pt=LH_DefaultDomain_0&var=&hash=item8e07fbf5f4

Thanks Patti! Those look good. Marine locks on the fridge should be fun for when we have friends over too. :-)