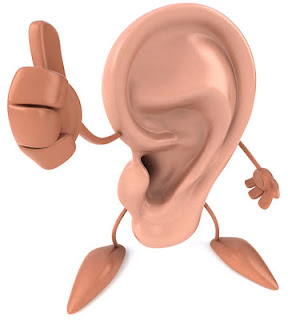 Poor Whitney.  She hates having things put into her ears.  Yet she's always getting poked and prodded there.  It had been quite a while since her last hearing test, so this week it was off to the audiologist.  With kids, hearing tests can be a pretty inexact science.  Everything hinges on how well the child participates.  If they don't respond to a sound it gets marked as not being heard.  But often it's because the child is daydreaming, or tired of participating or just plain frustrated with the process.  This happens all the time with Whitney and the trouble comes when they adjust her hearing aid volumes based on the inexact test results.  If certain tones are too loud wearing her aids can actually be painful.

Last time Whit was tested, she was pretty tired out by the time it was her left ear's turn to be tested.  She didn't cooperate very well and so the audiologist had to do her best to approximate the result.  Thankfully, during her most recent test, Whit cooperated much more willingly.  The new readings, which we believe are more accurate, also show that she has more hearing in her left ear than what the audiologist estimated previously.  We're thrilled that she has better hearing in that ear than we thought.  The bad news is that probably means Whit's left aid was blasting her out because we thought she needed more amplification in her left ear.  No wonder she gets tired of wearing those things sometimes.  Hopefully, she'll be more comfortable after the latest adjustments.  I'm glad she participated well this week because I know inside Whitney is just thinking, "Oh great they're going to stick stuff in my ears again."    If only we could explain to her how important those test are and how they help her.
Posted by Nate at 12:43 PM