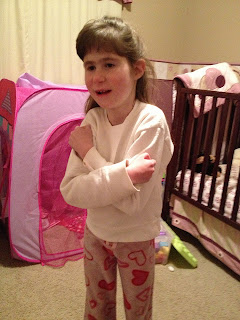 Due to near constant ear infections and other related issues, Whitney's balance has always been poor.  She manages it well, but when you watch her step off a curb you notice her hesitation.  We live in a home with lots of stairs and despite her issues with balance, Whitney has been brave enough to learn to climb them all by herself.  At first she would hang on to the handrails with both hands and pull herself up.  More recently her legs have gotten strong enough to walk right up them.  She's gotten very good at it, but her balance still comes into play.

The other evening when we were headed upstairs to bed, Whit lost her balance on the stairs and fell from about five stairs up.  She fell straight back and, due to her poor reflexes, didn't really catch herself.  Thankfully, she was bruised but she wan't seriously hurt.  The biggest injury has been to her confidence.  She's always had a fear of falling that comes from those balance problems and from the fact that she's just not quick enough to catch herself.  Falling like that has got to be terrifying.  And it took quite a while to calm her down and determine that she was okay.  Now we need to deal with the confidence thing.  Whitney's taken to sitting down and scooting up and down the stairs the last couple of days just to be safe.  I'm pleased that she's so cautious but I hope she gets back to walking up and down them again soon.

Whitney's had a lot of falls in life, both literal and metaphorical.  I'm grateful for her example of perseverance.  She always gets back up and keeps moving forward.  But all the same, I think I'll try to hold her hand a bit more tightly in the future.
Posted by Nate at 12:13 PM

I get a lot of ear infections, have you tried garlic oil warmed up and used as drops in the ear? And a warm heating pad helps the pain too. Antibiotics to kill the infection are great as well of course.

That's a good idea. Thanks! Poor Whit is almost always on antibiotics for ear infections and her eardrum burst again this last week. Sometimes they say no ear drops with tubes, but we'll check and see.