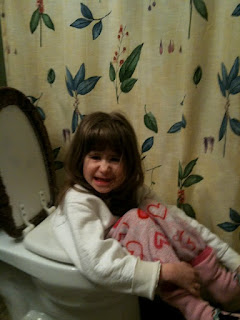 I've said very little over the years about potty training because Whitney has never shown any real interest and has generally refused to cooperate in any way.  She can be forced to sit on the potty and she'll stay there.   But she'll sit and hold it until we put her diaper back on.  This has literally been going on for years.

Melanie will sit Whitney on the potty at home every once in a while and the staff in Whit's class will take her to the bathroom quite a bit during the school day.  So we've all been trying to form the habit.  The missing piece has been for her to actually go.

Then one day two weeks ago we got a frantic call from the school around lunch time.  Melanie and I didn't get to the phone in time, but her teacher left an excited message about Whitney actually using the bathroom.  She kept her diaper dry and used the potty instead.  Everyone in class was so excited that they decided to celebrate.  One of the teachers aids ran to the store and picked up treats and they listened to music and praised Whit for her accomplishment.  Melanie and I had to laugh at the big deal they made of it.  But they were right for encouraging her.

At home we've been doing the same and she's actually made it to the bathroom a couple of additional times.  Most of the time she still just goes in her diaper.  But even an occasional success is a step in the right direction. Sometimes progress comes slowly.  But every milestone sure feels good.
Posted by Nate at 1:06 PM

That's fabulous! Way to go, Whit! (and mom and dad). We were trying with Zoe and actually having some success- I had built a potty seat that went on the toliet out of hard foam insulation which was working sometimes. Then Zoe got sick, and got sick, and then got sick again, and then broke her arm and got sick again after that and then I got sick and . . . well, we haven't had a whole lot of time to work on this goal :( I get a bit down on myself for not pursuing it a bit harder but you guys know you can only work on so many things at a time. It is very
inspiring to see Whitney's progress after all this time. Great work, Whitney- constantly impressing us! Love GGZA

Oh! Poor Zoe! I hope shee feels better soon. We haven't focused much on the potty becau it's so frustrating. But if it took Whit years to learn to walk, this may take years and years too. But we'll.get there and it'll be worth it. :-)

So exciting. That's a great start. Be patient it will come eventually and yes it is the most frustrating thing EVER!!!

Thanks, Jenny! It's good to get encouragement from someone who's fought the battle of the potty and won. Whit's making two or three successful trips to the bathroom a week now, so progress is slow, but it is coming. Yay! Hope your family is doing well!

My little Aiden is 8 years old. With the help of the aid at school and consistency with myself (nana) and mommy, we have successfully potty trained Aiden. He has come a long way this year in development. We are so proud of him.

Wow! Way to go, Aiden. I can't wait until we get Whitney all the way to being potty trained. Sure will be nice.