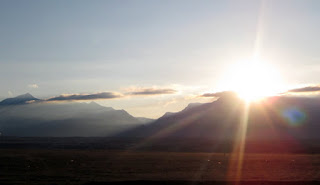 Whitney is a notoriously early riser.  Over the years she's caused the appearance of more than a few dark circles under my eyes due to her morning habits.    Sometimes she'll get up before any of the rest of us and quietly look for something to do.  This can lead to no good.  So Melanie does her best to listen for any sign of noise from Whitney's room.

One day last week I was getting ready for work well before first light.  Melanie thought she heard Whitney getting up and since I was up, she asked me to go take a look.  As I walked softly down the hall in the dark, I didn't hear any movement from Whit's room.  But all of the sudden I saw a flash of light up ahead.  When I got to the end of the hallway, I looked out the window to see what had made the flash.  I assumed there was a police car or some other emergency vehicle out on the street in our neighborhood.  When I looked, everything was dark and peaceful.

Just then there was another flash of light.  It came from behind me, inside Whitney's room.  So I slowly opened the door and peaked in.  In the darkness, I could just make out Whitney in the covers of her bed.  She was happily taking pictures with our digital camera.  She giggled, pressed the button and the flash went off again.

My guess is that Whitney woke up well before anyone else and went looking for something to do.  On the kitchen counter she found her phone, which she knows she's not allowed to use in the morning before school, and the camera, which also has a screen and looks pretty fun to play with.  She grabbed it and headed back to room to play with her new toy.  She quietly closed her door and climbed into bed and began to take pictures.  I'm not sure how long she played with the camera, but there were about 100 pictures on the memory card when I looked.  Most were blurry shots of her knees.  So she had been playing for a while.

Whitney and I both had a good laugh as we looked at the pictures and then it was time to get ready for school. She's getting sneaky enough in the morning that I can't wait to see what she decides to do next while the rest of the family is sleeping.
Posted by Nate at 11:57 AM