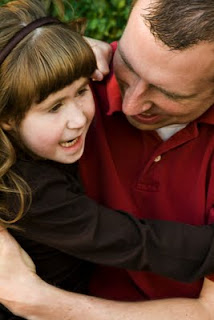 During Whitney's month-long break from school in April I was determined to see if there was any link to her health. My thought was that maybe because she was home more she'd be exposed to less stuff and be healthier.
I really wish things were that simple. Whitney still went plenty of places even though she wasn't going to school during those few weeks. And she had at least one trip to the doctors during that time period as well. She continues to have ear infections but a bigger problem has been stomach flu.
Whitney has had an upset stomach one day each week for the last three weeks. The first episode happened while she was out of school and the next two times cost her a day of school each time. Melanie and I are not sure whether it's the same bug or something else she's been eating or what. Luckily each time she's gotten sick she's been at home. And each time she's had the sense to get out of bed and find us before she's gotten sick. That's a huge improvement over the days when she would be sick to her stomach and then just lay in bed with it until morning when we'd discover her there.
So the questions remain. What has been making Whit so sick so often? And how can we fix things? She's missing school almost a day a week at this point and she's so sad when she can't go.
Maybe we'll start spraying her down with Lysol before meals or give her baths in hand sanitizer. Anything to keep her healthy and happy for longer periods of time. Anyone have some more sane approaches to keeping my little girl healthy without cutting her off from the world?
Posted by Nate at 12:18 PM

Have you tried giving her probiotics for children? Perhaps there is one she can tolerat and they come in powders, gummies and chewables. Sometimes kids with special needs have special tummies as well. A food journal might help as well. I know it is alot of extra work. But if you take notes on when she vomits, what she ate that day etc. you may see a correlation. Sorry if these are redundant.

Thanks! That's actually a great tip. Melanie has started trying some probiotic drops with Whit and so far they do seem to be making a difference.