Oticon Safari 300s for the Win 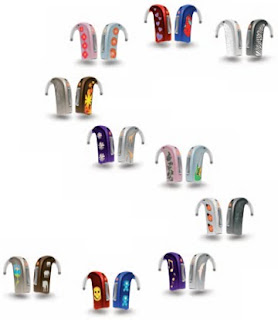 Whitney and Melanie headed to the audiologist this morning to pick out Whit's new hearing aids. It was clear a lot of things have improved in pediatric hearing aids since Whitney's last pair, Oticon Gaias, were developed. The new ones the audiologist recommended, called the Oticon Safari 300, are much smaller and more powerful. The have a tamper proof battery compartment and an LED battery indicator to take the guess work out of whether the batteries are still good. And most importantly they produce more accurate sound, especially in the frequencies for speech. Oh, and they're less expensive than we planned as well!

Optional features for the future include being able to switch from molds to tubes that fit more like headphone earbuds for more comfort and less hassle. Safari aids also support bluetooth phones, iPods, remote control volume adjustment and there's an adapter for TVs as well.

Oticon makes the casings in all kinds of different colors so Whitney had some fun picking out the color she wanted. She told Melanie she wanted pink and red. But they don't come two tone and our insurance probably wouldn't cover two sets, so Whit decided on the pink pair. They also come with stickers to personalize them just for her. I'm sure she'll have fun putting those on.


I was also pleased to find that Oticon continues to supply the stuffed rat- I mean otter- with his own pair of hearing aids that I got such a laugh out of last time Whit was fitted. The idea is obviously to show the child about wearing the aids and how they look, but the result is stuffed animal obsurdity that had us all in fits of laughter four years ago.


Anyway, Whitney is really excited to have new hearing aids. I think they're going to be a great improvement. Now that the order has been placed, the new aids will arrive, be fitted with new molds and be calibrated for Whitney by the end of the month.
Posted by Nate at 12:42 PM

Thats great. Ash's CI kind of works the same way in that it is Bluetooth compatable and a remote to control the settings.

Bluetooth, iPods, TVs, remote controls? That is awesome! Hearing aid technology sure has come a long way. Now if they could just get GPS tracking in them...

I'm thinking about getting the 900 since I'm sure I may be qulifed for it
BTW, my loss is moderate-severe
:)

Oticon hearing aids for me is the best hearing aids in the market today. Compare to other hearing aids that I've used, it gives me more freedom to enjoy other things whenever I wear it.