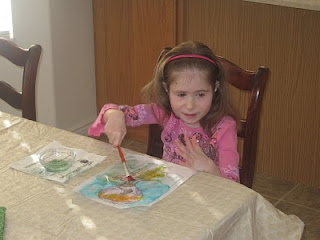 As I’ve mentioned before, all of a sudden Whitney is showing a ton of desire to speak. Melanie and I have seen notes come home from school about Whitney trying her best to repeat words in class. Previously, Whit’s tried to mimic vowel sounds, but now she’s trying to say the whole word, consonants and all. She’s not very successful yet. You can watch the wheels turn in her head as she’s trying to make her mouth do what she sees others do to make the sounds. It’s going to take some work to get all the way to actual speech. But now that she’s showing so much desire, it’s time to see if we can get some more work done in the area of speech therapy.

Melanie and I talked the other night about tracking down how many visits our insurance company will cover and then tracking down a therapist who’s covered in our network. We’ll start with that and see where things go. Whitney’s had a speech therapist before but she didn’t used to like to work with her at all. She was very uninterested and uncooperative, so we kind of focused on other areas for a while. But now that her interest has returned and she doesn’t need as much physical therapy, we’ll shift our focus back and hope for some actual verbal communication over the next few years. What a thrill that would be!

Keep on talking, Whitney! It's a lot of work to make all those sounds, but we know how determined you are, so no doubt you will get there- in your own way and your own time. Have fun.

Thanks! Can't wait to see you guys in just a few more months. Hope you're doing well!

It's funny because Gavin the other night said, "Did you know Whitney is making more and more sounds?" And I didn't respond "Whitney who?" I automatically knew he was talking about Whit. I love that the blogs make us feel so connected to other 1p families. I think it has had a big impact on our own coping. And it gives us people to brag to that really get it. So, yes- Whitney making more sounds is very exciting news indeed! Perhaps she will learn she better get vocal if she is going to keep up with little brother and the new little one!

We too are looking forward to seeing you all soon,
Genevieve

It is nice to be so connected even though our 1p36 family is so spread out. Whit sends love and hugs to you all. See you in a little over 3 months. It's coming up quick!

Totally off subject but - I remembered one of your posts from a while ago when coming across another blog today. You were talking about Whitney meeting and interacting with other children - in this blog the little girl attends girl scouts which has proved fantastic for them! Thought you may like to check it out; http://livingwithfaith04.blogspot.com/

Girls Scouts is an excellent suggestion! We're always looking for ways to encourage more social interaction for the little lady. Thanks!