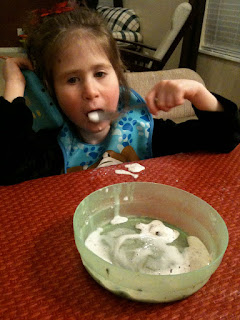 Yesterday was a big day for Whitney. Melanie and I met with the school district special ed decision makers as well as Whit's teacher and speech therapist. First, Whitney's teacher reported on Whit's progress in Diagnostic Kindergarten this past year.
Basically, Whitney has come a long way. At the beginning of the year, she was hard to keep focused on tasks, she thought the plastic letters on the table were for eating and she wasn't quite walking. Now Whitney can pick out her letters, both upper and lower case, from a group of three based on name and sound. She can complete a single verbal instruction with around 75% accuracy. And gross motor skills are her biggest success of all. Whitney can walk and even fast-shuffle run with the other kids. She's enjoying mainstream recess and is working on how to hop as part of her PT exercises.
Based on her skills and needs, Whitney has been placed in a "cluster" first grade class. She'll be at an elementary school with classes of typical children and two cluster classes that provide support for various therapies and special ed. This will likely be the school Whit will attend for several years so she can continue to work with the same people in the same facilities. In fact, her class will have both first and second graders in it who are all working on the same things.
The district continues to push contact with typical peers via mainstreaming. They promise that Whit will be supervised at all times. For first grade, she'll be mainstreamed for recess and music time, which sounds perfectly suited for Whit.
Melanie and I are pleased with the placement choice overall. The school is a bigger distance from home and may require nearly an hour bus ride each way depending on how many kids need picking up and dropping off. But it offers the right blend physical therapy equipment and therapists. So we'll deal with the distance. Whitney likes the bus and the school is definitely a better fit than some of the closer ones. The bus will probably come for Whit around 7:30 in the morning which will be a big change as well. Afternoon kindergarten has spoiled us this last year.
All in all we're very excited for the new opportunities. We're a bit nervous about having Whitney gone to school all day, but that's probably normal. And we're very excited at the progress Whitney has made this past year. Thanks to everyone who has worked so hard with our little girl.
**************
About the picture: After being so sick to her stomach last week, Whitney got back into her eating groove by Sunday. She's seen here listening to her omnipresent music player and polishing off her second helping of ice cream!
Posted by Nate at 12:38 PM

It's great to hear of Whitney's progress this year. It sounds like her kindergarten class was a great fit and that first grade will be the same! We are learning it's very hard to choose between the classroom options.
p.s. I can't wait to see Whitney walk/run and jump in person!!!

I love Misha's program right now. I hope we can get into something similar when he transitions into mainstream school.