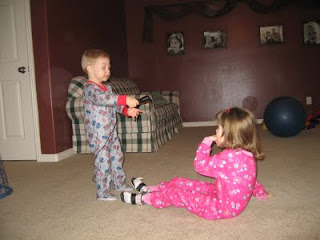 While Whitney signs well and is able to communicate her needs, Melanie and I haven't given up on the skill of actual speech. Whitney still vocalizes different sounds on occasion. And we've heard from other parents that walking and speech are somehow tied developmentally and seem to emerge together. Knowing this, Mel and I have tried to focus on speech since Whit is improving so much with independent walking. The only trouble is, Whitney doesn't really want to cooperate when we sit down with her and practice. "Say, aaaa." Nothing. "Say, oooo." Nothing.

But all is not lost. Whitney's little brother Liam is proving to be a pretty good speech therapist in his own right. For whatever reason, Whitney thinks it's pretty funny to mimic the things that Liam says. When Liam says thank you, Whitney will vocalize aaaaa oooo. When Liam says please, Whitney says eeeee. For right now it's just the vowels with no consonants, but she's getting the vowel sounds and the number of syllables correct.

Sometimes on a long car ride or something the two of them will sit in the back seat and mimic each other's sounds. It makes for a lot of noise, but Liam seems best able to coax more sounds out of his big sister. And with more work, I think we'll get close to actual words someday. I'm certainly hopeful.
Posted by Nate at 12:19 PM

It seems to work really well that way. Misha and Nikolai are competitive sometimes and it produces good and bad results. One of the things they seem to be competing in is speaking. Nikolai learns stuff from Misha, but if Misha hears Nikolai saying something he will try to repeat it. Sometimes Misha, when asked to repeat, will fall back to his old replacement word.

:-) Sounds like a little sibling rivalry can actually be a very good thing sometimes!

Cute! Your kids are getting so big. I"m assuming I'm looking at a glimpse of your basement since we've never been able to come and see it- from what I can tell it looks beautiful!!!

Actually, that's the living room on the main floor. I redecorated it recently for Melanie. But we'll have to get you guys to come over soon so you can see the basement and the living room remodel. :-)