A Visit From Saint Nicolas 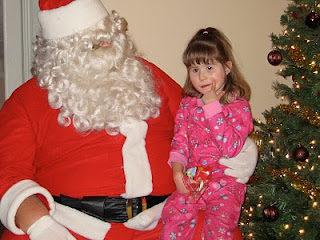 The doorbell rang around seven on Monday night and Liam raced me to the door. Whitney wasn't far behind and when we opened it we found a jolly old elf dressed in red. Santa Claus had stopped by to bring the kids and early Christmas treat and to make sure they were being good.

Santa sat by the tree and had Liam sit on his knee. My little two year old clammed up tight. He wouldn't say hardly a word to old Saint Nick. Truth be told, Liam was much more interested in the candy cane Santa had handed him.

Whitney, on the other hand, was thrilled to see Santa. She made her way over and was patting Santa's tummy before Liam's turn had even finished. When it was her turn on Santa's lap, Whitney smiled and petted his long white beard. We hadn't coached Whit on what to say when Santa asked what she wanted for Christmas. So we were surprised when she answered confidently, "Candy!" You can see her request in the picture above. I suspect that's something Santa can arrange.

Whitney understands so much more than we give her credit for. And she and Saint Nick seem to have a special bond. Thanks to Santa Claus for stopping by. And thanks also to everyone who visits this blog. We love hearing from you. Whitney, Liam, Melanie and I wish you a very Merry Christmas
Posted by Nate at 12:09 PM

How much fun. I wish we had a santa come visit. These kids do really know what they want and are more with the everyday things than I think we give them credit for some days. Merry Christmas to you all.