Adventures with the Stairs 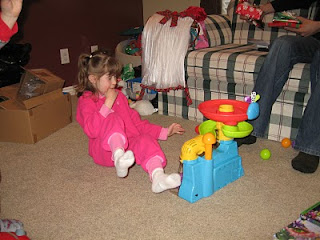 Our little house has quite a few stairs. There are stairs from the main floor up to where the bedrooms and toys are and stairs to go down to the basement where the kids like to play and watch TV. Because things are so split up between the floors of the house, Whitney has had to learn to navigate stairs since very early on in her life.

These days Whit is walking pretty much everywhere she wants to go. So it's frustrating to her to have to get on her hands and knees to go up or down the stairs. Melanie has been working with Whitney on walking up and down the stairs for some time. But Whit still lacks the leg strength to do it independently. Also, some of the handrails in the house are too large for her small hands to hold effectively for support. But that doesn't seem to stop Whit's determination.

Just yesterday Melanie was doing some things in the basement. When she looked up, here came Whitney walking down the stairs without any help at all! She was holding tightly to the hand rail, but she did it all on her own. Melanie figures she must have stood up, and walked to where she could reach the handrail. Then she hung on for dear life and stepped off. I wish we could have caught the whole thing on video. We were very proud. With a little more work Whitney will be doing the stairs in a downward direction by herself all the time. And I'm sure going up will come in time as well.

The stairs are also our time out place when Whitney or Liam need a moment to calm down. Melanie and I will set Whit on a step a couple up from the bottom and let her calm down for a minute before we talk about she's being disciplined. This usually works pretty well, but over the weekend we did have a mishap.

Whitney was very upset about a toy she wanted to play with, but couldn't have because Liam was using it at the moment. She proceeded to throw a pretty good little fit. Screaming, hitting and rolling on the floor were involved. Melanie put Whit on the stairs in time out to calm down. But Whitney wasn't having any of that. She pushed herself bum-scoot style down the couple of steps to the landing. She did the whole maneuver with such force that her back side came down very hard on the vinyl flooring on the landing.

Pop went Whitney's tailbone as she screamed in a more sincere tone now. Melanie raced to the rescue but the damage was done. Whit seems to have bruised her tailbone. She was very sore on Saturday and still refused to stay in her school chair on Monday. It's not keeping her from walking, but we know it's painful by how she acts. We've been treating it with a heating pad and children's ibuprofen. Hopefully she'll heal up quickly. Poor little girl. I doubt she'll try that particular little tactic during her tantrums again.
Posted by Nate at 12:38 PM

This blog is truly inspiring. I'm a grade 12 high school student from Canada,Ontario and your stories have helped me write my research report that is about 1p36 Deletion Syndrome. It has also helped me to understand certain aspects about it and encourages me to pursue my dream career of a speech therapist. Just awesome! :) Keep it up!

Hi Paulina! Thanks for reading along! Little Whit's adventures are an inspiration to me too. Good for you for seeking out a career that will help people with special needs. I'm sure it will be very rewarding. Whitney sends you a big hug!