I Just Want a Friend 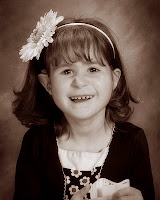 A couple of weeks back, when Whitney was still on break from kindergarten, some of the neighbor kids knocked on our door. Melanie opened it and Whitney excitedly came over to see who it was. She's a social little lady and loves it when people come over. The kids had just come to get an egg or something their mother needed for cooking dinner. Once they had what they needed, they headed home.
As Melanie closed the door, Whitney became very upset. We could tell that Whit really wanted someone to come over and play. She had been extra lonely because she hadn't seen her school friends in several weeks and was suffering from serious social withdrawal. It's tough on her because the neighborhood kids her age are very kind to her, but really can't relate to a child that can't talk or do many of the same things they enjoy.
Melanie and I are going to have to work harder to involve Whit in social events and interactions. I think she really craves them and they definitely make her happy. When Whit does have other kids to play with she's so much happier. She looks forward to school and church because she gets to be around other kids and interact with them. It doesn't take words to see how much she thrives on being around others her age. Any good tips on finding more social interaction?
Posted by Nate at 12:53 PM

I don't have any suggestions for your dilema - sorry - but I did want to post and say how pretty Whit looks in the pic!

Are there any therapy places in your area that may offer classes she could take? Our therapy place offers classes for all types of groups - adaptive dance, social classes, handwriting, eating, sensory, etc. Maybe there are some options like that near you? Or a place that does adaptive swimming lessons, karate, etc?

I know that we sure miss having her over to play!

Interesting dilemma. Misha doesn't interact very well with kids his age, with most kids actually. He usually engages adults who can play with him, or read to him. He does have a couple of cousins that he likes but that usually involves a hug or a pat on the head at the most. I would suggest family if you have them close around.

Give us a call and we can drive down and let her and Shay play! I know Shay would love to play with her again and make her laugh. :)

That is a great idea. We'd feel bad making you drive so far especially with everything you guys are dealing with right now, but Whit would love to play with Shay again!