The Tantrum and the ER Adventure 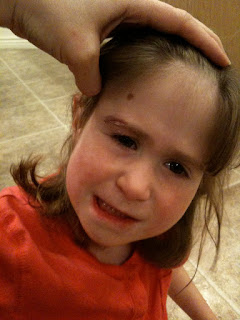 I lightly alluded to a behavioral problem in last week's post: Tantrums. In that post I mentioned that Whitney had injured her tailbone during a recent tantrum and has just barely recovered. I figured maybe the pain would be a good reminder that it's not good to throw yourself down and have a fit even when you're mad. Sadly, I was wrong.

This past week Liam took a toy that Whitney was playing with. Whitney was very upset and launched into another tantrum. Before Melanie could intervene, Whitney had thrown herself down and hit her forehead on another nearby toy. Whit's tantrums are something a toddler might do, but she's a lot bigger and stronger than a toddler and she can do some real damage. On this occasion she split open her forehead above her eye.

Melanie was able to calm Whit down and slow the bleeding but the cut looked deep enough that stitches would be needed. So it was off to the ER. Whitney was brave at the hospital, but it was painful when the doctor had to clean out the cut. Luckily, once it was clean the doctor recommended using some medical glue to hold the cut shut instead of actual stitches. Using the glue eliminated the need to sedate Whitney, since she's too strong to hold still for something like sewing her forehead when she's upset.

The whole visit took less than two hours. Whitney was back home and playing later that afternoon. But she'll likely bear a scar near her eyebrow as a reminder of the adventure. She'll be like her daddy in that respect. I have a scar near one of my eyebrows from when I was young and horsing around. I clocked my head on our family's brick fireplace.

Whit seems to be managing the pain okay with just Children's Tylenol. She did have a pretty good goose egg in the area the next day. These kinds of injuries are a normal part of growing up I suppose, but I hope Whitney soon learns more self control. It's hard to see her injure herself when she gets upset.
Posted by Nate at 12:08 PM