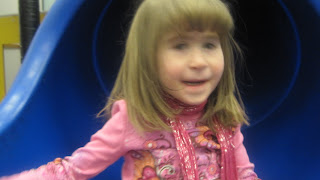 We enjoyed celebrating Whitney's birthday as a family again. It's hard to know what food or restaurant Whitney really likes. But we do know that she loves to play on the slides and play equipment at our neighborhood Arctic Circle. So that's where birthday dinner and playtime took place. Liam and Whit had a blast playing and the staff brought us free ice cream cones after a dinner of mostly french fries.

Then is was time for presents. Whitney got some new clothes, books and toys. Her favorite gift this year is a children's mp3 player. Whitney will sometimes get a hold of an old phone we have that plays music. She'll turn on the children's songs and walk around the house all day with it. But the battery doesn't last as long as she'd like and it's not great that she's running around the house with a phone. So this little player has a handle that's just the right size and a speaker so she can hold it near her ear and enjoy all the children's songs I loaded on.

For Whitney's 6 year checkup the doctor was mostly pleased with her progress. Her left tube has come out of her eardrum again. But she is slowly continuing to gain weight. For those keeping score at home, she's up to 28 pounds now. Anyone else out there have a sub 30 pound six year old? The doctor said he's pleased to see the increased muscle on Whit's legs which is probably due to her stair climbing. Whit also got her H1N1 booster shot, but luckily that was her only immunization this trip.

Happy birthday little girl! And thanks for teaching me so much over the last six years!
Posted by Nate at 12:45 PM

WOW, Six already where does the time go. She is so cute, we really need to get together sometime, it has been ages.

Hey there Green family! The time does fly. Thinking of you guys this weekend with Rob's birthday. Hope you're well. We'd love to get together soon.

And Heather, we're so glad you're coming this summer. Can't wait to see you again in July!

Happy Birthday Whitney!!! You continue to inspire all of us! And you are so darn cute...I'm sending a big hug through the computer. Can't wait to see you guys this summer.

Please pass along hugs for birthday girl Alayna as well. I'm really excited you're going to be able to make it this summer we're really looking forward to it!