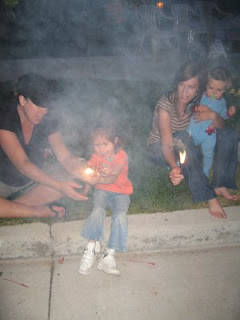 Whitney is now on her third pair of DAFO ankle braces to give her support when walking. The braces make it possible for her to keep her balance and walk without her ankles rolling inward due to low muscle tone.

However, we've encountered a problem that we didn't have with her first two pairs of braces. The left one has started to rub Whit's foot raw. Melanie noticed Whitney's reluctance to walk after only a few days with the new set of braces. She assumed it had more to do with the new pair of shoes she'd bought to go with them. But Whit began to protest no matter what shoes she wore with her DAFOs. So we knew it must be the new brace.

Soon we began to see redness at the points where the brace was rubbing. Then around her left ankle we began to see bruising as well. We've stopped using them and Melanie called the Physical Therapist's office. They'll be rushing us in to get a new mold cast which will hopefully provide a less painful fit for Whitney's foot. They may also be able to solve some of the problems with a little more foam in strategic places inside the brace. Cascade, the good folks who made the braces, guarantee them for life. So the new fitting won't cost us anything.

They're going to make it a priority job because Whitney's old pair of braces no longer fit and she's left with wobbly ankles without them. Thankfully her sore ankle has begun to heal. But we've learned an important lesson. We'll be sure to keep a closer eye out for painful spots on her feet in the future.

Oh, and by the way! Whitney loves sparklers! As you can see. Now we've just got to teach her not to try and touch the part that's burning. :-)
Posted by Nate at 1:16 PM

It looks like she definitely loved those sparklers! Hopefully her braces start getting better for her!

I'm writing from StoryCorps, America's largest nonprofit national oral history project. I thought you and your blog readers would be interested in listening to StoryCorps' latest story to broadcast on NPR this morning. Magician Ricky Boone, who has a rare bone disorder, tells his friend Patti Barber about learning magic and the educator who had a huge impact on his life.

StoryCorps is an independent nonprofit project whose mission is to honor and celebrate one another's lives through listening. Since 2003, tens of thousands of people from across the country have interviewed family and friends through StoryCorps. Each conversation is recorded on a free CD to take home and share and is also archived for generations to come at the American Folklife Center at the Library of Congress. Millions listen to the award-winning broadcasts on public radio and the Internet. Select stories have also been published in the New York Times bestselling book, Listening Is an Act of Love.

I hope you take the time to listen and share.