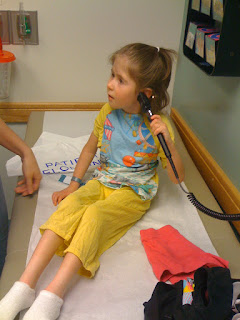 Yesterday was surgery day for Whitney. We arrived as requested at 6:45 am and waited with other little families and their children to be checked in. Whitney was pretty brave during the pre-op exam. For those keeping score at home, she now weighs about 28 pounds and has very typical blood pressure for a five year old.

After the exam, we changed Whitney into her ICU gown and waited in the surgical waiting room with the other families. One by one they were called back. Whitney’s new ENT came by and asked if we had any questions. The anesthesiologist also came and talked to us briefly. He was very confident and had no problems with the fact that Whitney has a genetic disorder. This was refreshing after our earlier experience.

Then it was time for a little Valium to calm Whit’s nerves and a ride in a wagon down the hall to the OR. Whitney was a good sport and cooperated with the hospital staff. Melanie and I went to yet another waiting room.

A half an hour later the ENT was back to see us. Everything was a success. Her tubes were quick and easy to place and her adenoids were out. They were what he called a 2.5, so it was good to remove them. I’m not sure of the measurement system they use for adenoids but they were larger than they should have been. Having them removed will allow her ears and sinuses to drain more easily and she’ll also have an easier time breathing.

Whitney came to about an hour following the procedure. She was sore and upset (anesthesia always disorients her) but Melanie calmed her with some music. Kermit the Frog singing “Rainbow Connection” works every time. Whitney got some Lortab for the pain and watched some cartoons. She kept everything down and was extremely cooperative. So by noon they checked us out. This sets a record for our fastest turn around time for an out patient procedure.

Whitney’s face is a little swollen and, by her breathing sounds, so are her sinuses. She hasn’t had any bleeding in her ears or nose though. We’re pleased about that. Her appetite is pretty good but we know it hurts to swallow. She winces almost every time. When she has her Lortab in her, she’s happy and plays about like normal. So we’ll manage the pain for a few days and start to scale back on the pain killers.

Full recovery should take a couple of weeks and in the end she’ll be breathing easier, hearing better and less prone to infections. We’ll all be excited for that.
Posted by Nate at 1:02 PM

Glad to hear everything Went well. Let us know if you need anything. We miss seeing you guys!

Poor thing, I'm glad that it went well though!! :)

Great new. Glad you could get it done.

I am so glad that she was able to get this done! how exciting for you guys! we are glad all is well.

We're glad to hear that everything went well. Hopefully you will see an improvement in her ear infections now.
See you soon!

I glad all went well, Who was her ENT at PCMC? We have seen a couple of them up there.

Glad everything went well!! Was her surgery at PCMC? I was there on Monday as well! If I had known, I could have come said hi!

Hopefully she continues to improve and starts to breathe better.

Thanks everyone. Whit continues to do well. She's off the Lortab now, managing the pain with Tylenol. Her appetite is still pretty decent and she even made it back to school yesterday.

Oh yeah, and we saw Dr. Grimmer @ Primary's so we just missed you Renee. We'll have to get together soon. By the way, we really liked Dr. Grimmer. He's doing a great job with Whit.

I really like him too , I hope all is still well.