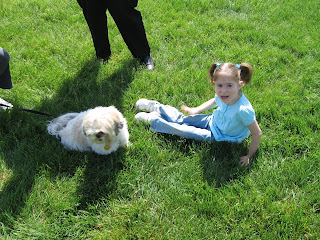 This week marks the very last week of Special Needs Preschool. Whitney will be graduating with what I would consider honors and moving on to Diagnostic Kindergarten this fall. Melanie stopped by the preschool one day this last week and got some more info about Whit's new class.

We already knew it would be an afternoon session but we just learned the location of the school. It's going to be a little longer bus ride. But it should be manageable. Whit's a trooper and shouldn't mind as long as there aren't too many stops along the way. I imagine Whitney is one of the farthest from the school. Good thing she loves bus rides!

We also found out her teacher's name. We'll be giving her a call so we can get to know her a little bit and get her familiar with Whitney. Whit's teacher last year will also pass along her notes on Whit, but sometimes meeting her in person is the easiest way to assess her needs.

The best news was that the physical therapist who's been so instrumental will be sticking with Whit after the move. She's the PT at several schools in the district and will keep working with Whitney once a week. That's sure to mean more great walking progress.

Whitney will be assigned an ASL interpreter which will be helpful. However, having a signing aide this past year was also very helpful and she's not been assigned one of those for kindergarten yet. That'll be an item for an upcoming parent teacher conference. But we're not too worried. I'm sure we can work something out. Whit's signing aide this year says she'd love to keep working with her if the opportunity arose.

So it's mostly good news as the clock ticks down for the new school year to begin this fall. But I'm still coming to grips with the fact that I'm old enough to have a kindergartner in the first place. But I'm certain she's going to have a great experience.
Posted by Nate at 2:06 PM