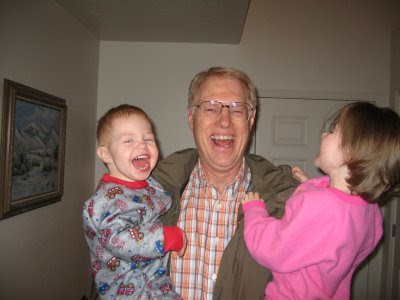 Whitney and Liam happy to see Grandpa Hanson
This afternoon Melanie and I went to our first parent teacher conference since Whitney started at the new special needs preschool this past fall. We were only there for about 20 minutes but a lot of things about Whitney's recent progress made much more sense after we chatted.

First off, signing. I didn't know it, but a sign language teacher from the school district has been coming out to Whitney's class to work with her twice a week for several months now. He interprets for her during class and everything. The first few times Whitney called him funny and didn't pay him any mind. Slowly though, she's become accustomed to watching him and understanding class through the signs. She's even been signing back to him more now. It's really been a big help for her. I suspect that some of her recent sentence signing progress has been due to watching full sentences being signed in class. Next month when we meet with the school district to set goals and prepare for kindergarten we're going to request a full time interpreter for her. I think that will help her go far.

We also discussed learning the alphabet and reading. Whitney's teacher had also noticed that Whit recognizes quite a few of her letters and she'll keep working with her on lower cased letters and recognizing more words.

On the physical therapy side, Whitney is getting in and out of chairs more easily and walking around the classroom with only one handed help. She gets more confident on her feet every day.

Her teacher says during unstructured time, Whitney still loves to pose in front of the mirror. She has a furry little scarf and a necklace that she'll put on. Then she admires herself in the mirror. I suppose we'll have to work on the vanity a little bit, but she is a very cute little girl, so I guess I can't blame her too much.

Thanks to all the great teachers, therapists and others in the school district who help my little girl along. Melanie and I are so grateful for all you do for Whitney. She wouldn't be where she is without your diligence and hard work.
Posted by Nate at 3:34 PM

It is so great that the school is doing so much with her. I can only hope Abbie gets as much. I love the pic!

I am so happy to hear about Whitney's progress in school! It sounds like Whitney is so good at signing and requesting a full-time interpreter for kindergarten is a wonderful idea and Whitney's right to have one. I think she'll be moving on her own two feet with no assistance in the near future. Wow, she is growing up so fast and she'll be 5 in January! If I remember correctly maybe the 21st? I hope we see you at the next conference. We miss you guys. Hugs to everyone in Utah.

Oh my goodness, Liam looks so much like his grandpa. So sweet.

Thanks you guys! We do love Whit's school. It's so fun to see her progress.

How wonderful! I will keep the interpreter in mind for when Sammie goes to school! So happy to hear she is getting around with less help! Good for her! Go Whitney!

This is my first visit to your blog and I'm amazed by all the caring and nurturing people you have managed to make a part of your life. I haven't read your entire blog yet, but already know that your stories would make good candidates for a website that I moderate called care2tell. It is designed for caregivers and their patients to relate short anecdotes about their experiences in the world of caregiving--mainly to show the good side of human nature. I hope you'll take a look at the site and decide to share some of your stories with the rest of the members. It's at www.care2tell.com.