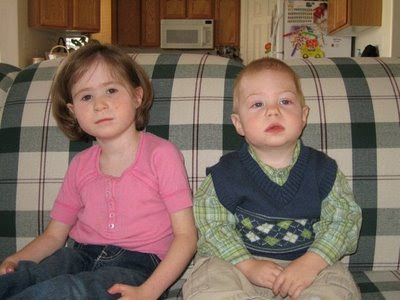 The Couch Potato Kids
Here in Utah with the large number of children and the limited number of schools, elementary students go year round. They are divided into tracks and rotate sessions so there are classrooms and teachers for everyone. This includes the special needs students like Whitney.

So Whit is in the middle of an "off track" period of about three weeks. It's like the dog days of summer but worse because it's cold enough she can't even go outside to play. She misses school quite a bit. Several times she's gone to get her backpack and put it on. She looks out the window and watches for the bus. But of course it doesn't come.

Melanie has been really good to dedicate extra time and attention to Whit so she doesn't get feeling so bored and confined. She plays games with her and reads books. She works standing therapy into the mix of fun to help strengthen Whits legs and trunk. Liam gets into the act as well and the two children laugh and play together.

It seems Whit and Liam have also become mild couch potatoes recently. It's tough when they can't go outside to play as much. Melanie is good to carefully limit and control what they watch. Lately Mary Poppins has been a big favorite. Whit loves the scene with the dancing animated penguins. Penguins have been a big thing for her ever since the New England Aquarium.

We have some pretty good times just staying home some days. But I know Whit will be excited to head back to school soon and be with her teachers and friends again.
Posted by Nate at 8:05 AM