Getting Ready for Halloween 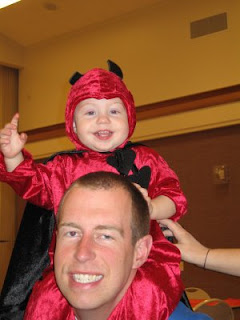 Life has been calm at home lately. Fall is here and the air is cooler. Whitney and Liam have been spending more time indoors lately. But the kiddos are both really excited for Halloween. Reflecting their personalities, Whitney has an angel costume and Liam has a little devil costume. They're both pretty adorable. But like typical children, Whit won't tolerate her wings or halo and Liam can't stand his hood with the little horns on top.
We carved pumpkins as a family last night. Melanie and Whitney made a toothy, smiley face on one while Liam and I carved another smiley face on a second one. We don't really do 'scary' at our house. It was interesting to note the different approach to textures between the kids. Liam loved sticking his hands in the pumpkin goo. It was all I could do to keep him from eating the seeds. Whitney, on the other hand, had to be encouraged to touch the pumpkin guts. She's far too tidy and texture averse to go anywhere near a mess like that of her own free will. 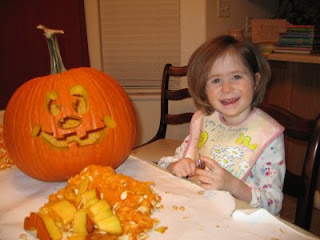 Whitney's stamina has gotten a lot better in the last year, so I'm really looking forward to getting out to trick or treat with her. She'll love the candy too. And Liam will just love to be big enough to participate in the same activity as his big sister. Hope I can keep up as we go from house to house on Friday.
Posted by Nate at 2:48 PM

Wow, I detest carving pumpkins (too messy and goopy) but you guys are so great at carving, how much would you charge to carve mine? Hey thought I would ask in this day and age of outsourcing ;)

Have FUN trick or treating... I always knew Liam was a devil, hee hee.