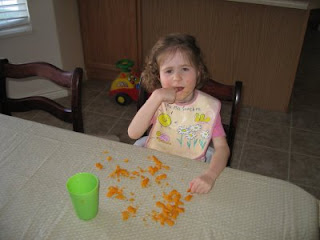 Eating her weight in Goldfish
When Whitney was littler mealtime was the most dreaded time of the day.  It was torture trying to stick food into her resistant little mouth.  Melanie was in tears at least once at the nutritionists office as they hounded us to get more calories into our little girl.  Whitney is well below the growth curve for typical children and always has been.  Many 1p36 children are so far below the curve that doctors prescribe surgically implanted feeding tubes, called G tubes, to help them get critical nutrition.  And while that's been absolutely necessary for some little ones, we always felt it wasn't the right thing for Whit.  We just kept fighting to get food into her.
The other thing that's been constantly on our minds is that many 1p36 children have a tendency to start packing on weight around four or five years of age.  We've waited and watched for this to happen to Whitney to see if it will give her greater strength and higher energy levels.  And at last I think we've finally arrived.
Well we're happy to report that mealtimes over the last month have become less about battling to put food in Whit's mouth and more about putting more food on her plate.  She suddenly has a terrific appetite and while she still won't tolerate some textures, she's really eating!  And good things are happening as a result.  Even though she had a bout of sickness after the September conference, she has put on a whole pound in the last month.  That may not seem like much to many of you, but that finally puts Whitney up to 26 pounds.
She eats a greater variety of foods in much larger quantities and it's such a relief.  In fact, this past week when we were running late and the kids were hungry, Whitney and Liam had their first Happy Meals.  This sounds like a dubious first to remember, but Melanie and I have never been confident that would tolerate a hamburger or a pack of chicken nuggets before.  Turns out she loves them. So we'll know that when we're running late we've finally got some options that typical parents have.  And hopefully this is just the beginning.
Posted by Nate at 2:59 PM

We can't believe how fast Whitney is growing, she looks so big..

We love reading your updates and you guys are the most optimistic people we know, that's why Whitney is doing so well!!

Good Eating! It's good to hear that she is eating better. And that you have found something she likes. Misha loves fries too.

How does Whitney feel about steamed veges?

GO Whitney. I can not believe she has gained a lb this month. That is so great! Maybe one day Abbie will do it too.

Whitney does pretty well with most cooked veggies. Things like corn and carrots are her favorites. spaghetti squash's texture was still a bit much for her when we tried last week. ;-)

I forgot to mention, one of the reasons she's suddenly done so well was that we've quit giving her chips as a reward for eating. She was pretty addicted to the salt and grease. So she didn't want to eat anything but chips. But now that we're about a month in from when we cut off the chips, she's eating meats, breads, cheese, vegetables, and more. It's so encouraging!

Way to go Whitney! I can't wait until meal time is not such a struggle and I don't end up in tears!
Good for you guys for always advocating for her and pushing her to eat.

What a doll!!! So happy she is eating away....I enjoy reading your blog