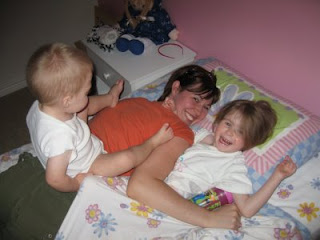 Clowning around at bedtime
Things have been pretty routine around here lately.  Which has been kind of nice.  We did have some family fun yesterday though.  Our deaf mentor, Brett, brought along some cards to play with as part of our sign lesson.  He taught us about the word have and how it's used to indicate possession in ASL.
Then to emphasize the lesson we got to play "Go Fish" with our voices turned off.  Whitney and I played as a team against Brett and Melanie.  We asked, "Do you have a blue egg?" all in sign and got to tell people, "Go fish" when we didn't have the card they asked us for.
Whit and I played pretty hard.  She enjoyed holding the cards and helping get matches.  Brett won the game, but he may have had a bit of an advantage. ;-)  Whitney and I came in second.
We're going to keep working on sign language by having certain times where we turn our voices off so we can practice.  Liam is getting into the act lately too.  He knows a lot of food and animal signs which will make it easier for him to communicate with Whitney.
Posted by Nate at 2:55 PM

I love the signing ideas I get from you guys. I am checking into a deaf mentor for Abbie through her ENT and audiologist. Is it a stae thing or do they do it evey where?

Hi Kim! The local deaf mentor program is sponsored by the Utah School for the Deaf and Blind. I bet there's something similar in Florida. The Deaf Community has a deep cultural value that says they should help deaf children learn. It's very cool the way they are so willing to help. Good luck and hugs for Abbie!.

Thought you might be interested in Little Joe's story (he also has a rare genetic condition and is hearing impaired).

Sharon, thanks for sharing that video. Little Joe is quite the fighter and his story is very touching. Amazing! A trisomy and a tetrasomy and doing so well. I loved the line toward the end of the video. "A diagnosis is not a prognosis!"

Wow- that is amazing about Whit knowing her letters and numbers. And amazing how much sign Whitney can do. Seeing you guys at conference really made us think we need to step it up a notch with Zoe and signing. So now we have to push ourselves to learn more so we can teach her more. I like the idea of having silent time and only using signs. Good idea. Zoe isn't ready for that yet, but it gives us some great ideas for teh future.

Wow, what a great site you have created here! We are all happy that Whitney is growing and progressing mentally and physically. She better keep practicing so she can show off her talents to us this December!