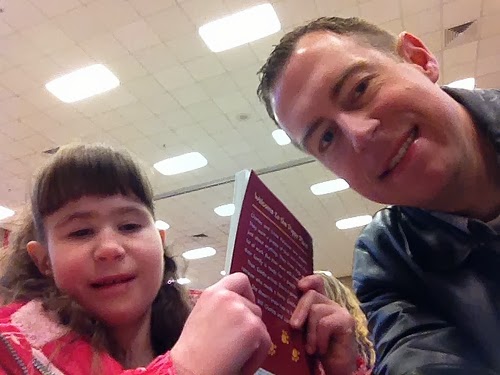 During the daily rush of helping Whitney get dressed, off to school on time and countless other things, it's easy to set aside teaching important lessons.  Melanie is better than I am about taking advantage of teaching moments.  So when I see something new it often comes as a surprise.  Even when it's been something Melanie has been working on for some time.

For example, Whitney got into some things in our basement and made a big mess that Melanie and I had to clean up.  Whit knew she had done something wrong even before cleanup was done and punishment time began.  She came over and got our attention and signed, "I'm sorry."

Now that's a small thing, I realize.  But I was so surprise and pleased.  It represents the fact that Whitney, on her own, realized she had caused a problem that Melanie and I were having to handle.  She realized that she was responsible and chose to apologize all by herself.  She's beginning to take responsibility for her actions and apologize when she does something wrong.  And she's picking it up pretty early in life, too.  I think we all encounter adults who still haven't mastered this.

I'm grateful to have a daughter who is responsible, self-aware and has such a good heart.  Maybe one day she'll learn not to make the kind of messes she sometimes does.  But in the mean time a sincere "sorry" sure makes a big difference.
Posted by Nate at 12:56 PM

It is so interesting to see her progress. It is a big step for her to realize she did something wrong and another big one to apologize for it. Way to go, Whitney.

Unknown said...
This comment has been removed by a blog administrator.
11:48 PM

Unknown said...
This comment has been removed by a blog administrator.
12:04 AM