The Trouble with Eardrums 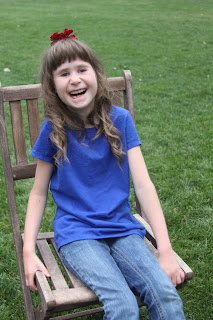 Whitney was in for surgery again this past Monday.  It marked ear surgery number five for my little lady. Whit's ear, nose and throat specialist was concerned about the constant ear infections she continues to have.  In his office he wasn't able to really see the condition of her eardrums or her last set of tubes.  He recommended surgery to go in and assess the situation.  If the old tubes weren't doing the job, new ones could be put in.  Or if removing the tubes and stitching the eardrum closed would be a better option, the ENT would do that.

So it was off to the local children's hospital and after several hours of delay Whitney was in the operating room.  She was in for under twenty minutes.  During that time, the doctor found a blockage in Whit's right tube.  So that one got replaced.  But when he started work on her left ear, the doctor found that previous surgeries and infections haven't left much of an eardrum at all.  Her previous tube was gone and in its place was just an inflamed hole.  It's not likely that Whitney has much hearing left in that ear and the doctor is worried that the bones that mechanically conduct sound waves from the eardrum to the inner ear are also in jeopardy because of all the infections over the years.

We'll meet with the doctor in four weeks for a follow up.  We'll need to look into whether we allow some reconstructive surgeries or whether it will even be worth putting poor Whit through a bunch more pain for something that might not benefit her very much.

Thankfully, her recovery over the last few days has been pretty good.  Ibuprofen has managed her pain okay and she's eating and drinking like normal.  So we're relieved but disappointed and waiting to see what the next steps are.  Setbacks are never fun but I give thanks that she stills hears in her right ear and with hearing aids she can enjoy her favorite music, Tag books and TV shows.  This kind of thing is humbling, but since we've been through seizures and other serious health issues, we can put things in perspective and keep moving forward.
Posted by Nate at 1:11 PM

Hello! I just found your blog while doing some searching online about 1P36 Deletion Syndrome. I have a daughter who is 8 who was diagnosed with 1P36 Deletion Syndrome about 6 months ago, so we are just getting adjusted to the new diagnosis. I read a bit on your blog and it sounds like our daughters are similar in a lot of ways. I also saw that you live in Utah? We also live in Utah and so if you are open to it, I would love to ask some questions of your family about resources, etc. around here. We live in Provo and I have had a hard time getting access to services for my daughter. We also have a blog- www.strobeliteblog.blogspot.com, but it is just a family blog, though some information is there about Flor and her diagnosis as well.

Thank you for keeping such a wonderful blog. It has already been helpful to me!
Kim Perry

I saw your comment over the weekend. I checked out your family's blog too. You guys are awesome running with that stroller! Melanie and I are meeting more and more 1p36 families here in Utah. It's pretty exciting. I think there are 5 or 6 of us now that I know about. Feel free to email about services, doctors, therapy or anything you'd like. My wife and I are happy to help. nate dot hanson at me dot com is the address.

We'll also have see if we can find a date to do a Utah 1p36 get together. There's a big annual conference that was just held in Texas, but we couldn't go (too expensive for us all to travel). But it'd be fun to hang out with the local families we know and swap stories.

We'll look forward to hearing from you.

Have a great day!
Nate