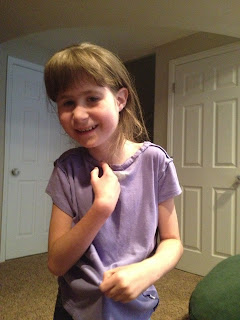 Whitney is out of school for the summer and getting into new kinds of trouble.  Melanie and I are usually pretty prepared for most things.  It's when she's doing new things and progressing that she sometimes gives us mischievous surprises.

The first of these has been taking showers.  Not the kind where we help get the water ready and help her get clean.  I'm talking about the kind where Whitney sneaks into the bathroom when we're not looking and turns the shower on herself while she's fully clothed.  She's done this a couple times in the last few weeks.  And by the time Melanie can get to her, Whit is usually soaking wet and smiling about what she's accomplished.  I don't think we mind the interest in showers too much, but it'd be nice if she could learn to take her clothes off first.

But there's progress on that front too.  Melanie has been working with Whit to teach her to take off her clothes at bedtime.  She's made the most progress with her shirt.  We know this because Whitney has taken to running around the house topless.  I'll be sitting someplace reading and she'll wander by with no shirt, sporting a proud smile.  Melanie finally got fed up one day and told her to go find her shirt and put it back on.  To Mel's surprise Whitney disappeared and returned a few minutes later wearing her shirt again.  She'd followed instructions, found her shirt and put it back on all by herself.  Mel says she kind of teared up for a moment just thinking about the accomplishment.  Special needs parents are so good at savoring the small victories.  Who cares if her shirt ended up inside out and backwards?
Posted by Nate at 3:51 PM

Love it! Way to go Whitney! It's those little accomplishments that are so big to us. Thanks so much for sharing it with us! Lots of love and blessings to your beautiful family!

Thanks, Sherry! You guys are amazing. Sure wish we could get down there to be with you all for the conference.

Be careful what you wish for- once Whit knows how to take the clothes off you will be finding her naked all the time! If she is hot on the bus or just bored...

We have always enjoyed reading your blog. I find you are great a balancing things and recognizing some of the down sides but always celebrating your life. I still remember that yours was the first blog we came across when Zoe was around six months. Before that time our only experience was the horribly depressing articles the doctors had given us. Zoe was very slow to progress in the beginning so we began to think the articles were the best we could hope for. Then we came across your blog and we saw what a beautiful daughter you had and that yes, there is life after a diagnosis. It's a different life than the one you thought it would be, but it is still a great life.

Thanks for blogging all these years. I can't believe Whit is 10!!!!!! Amazing!

Thanks, Genevieve! You are way too kind. We miss seeing you guys and hope you're well. Oh! And you're right. I'm sure we're headed for a naked on the school bus scenario sometime soon. I'll be sure and share all about it when it happens. :-)

great blogs.i am also trying to blog for my disabled daughter. i hope i would do better.

my daughter was born with missing three limbs.