Return to Dads and Donuts 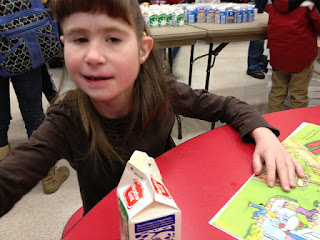 Each year Whitney's school hosts a day where fathers can bring their kids to school and read them a book while they have a donut for breakfast.  It's one of my favorite school activities of the year because it's just for Whitney and me.  This year Whit rode to school with me and we talked a bit on the way.

When we got to the school, I could tell Whitney remembered doing this with me before.  She marched right into the gym and found the tables full of books that they were giving away to the kids.  And just like last year, she perused the selection until she found a book about Clifford the Big Red Dog.

Then we found a seat, had some donuts and milk and read all about Clifford's latest adventure.  Another little girl whose dad must have not been able to make it, joined us mid-story.  She was cute with Whitney and put her arm around her as she listened.  When we were done, she asked me why Whitney doesn't talk.  I told her that Whit actually does talk but she uses her hands to sign and make gestures instead of talking with her mouth.  The little girl seemed to understand.  The kids at Whitney's elementary school are used to seeing special needs students at recess, lunch and other activities because of the several cluster classes in the school.  And they've all been really accepting of Whitney.  It's actually really fun to watch them with her.

When the bell rang to indicate it was time for class, Whit gave me a tour of her school on the way.  She showed me the computer lab, where the bathrooms are and other things that interested her.  I finally had to ask someone where her classroom was.  The gentleman that helped us out knew Whitney by name and it's clear she knew him as well.  I believe he might have been the principal.

When we finally got to class Whit showed me her desk and we hung up her coat and backpack.  As other students arrived she greeted them and I watched them interact.  I really enjoyed seeing a bit more of Whitney's day for myself.  I usually get to hear things second hand.  Being there is person is really nice.  And it's obvious she really loves going to school.
Posted by Nate at 12:42 PM

I love reading about your family. Such good parents you are! Wanted to pass on an article that's being distributed this month. You may find it of interest:

Thanks, Kimberly. That was a good article. Those are all certainly things I've felt before. I've found that taking challenges and turning them into adventures helps me keep moving along. Thanks for reading!