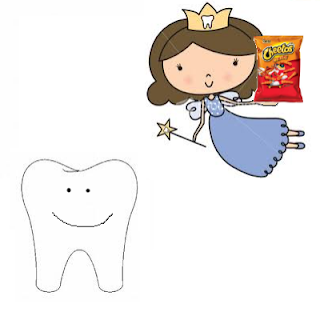 Typical children our society have a pretty good grasp on currency by the time they're old enough to start losing their teeth.  In fact my four year-old son, Liam, is getting pretty good about asking for his allowance on Saturday after he's had a good week helping out around the house.  However, Whitney is now eight and beginning to lose her baby teeth but she has no clue about money.  The only time she shows any interest is when she steals Liam's piggy bank and shakes it because she likes the sound.

As you can probably guess by now, this is all leading up to an important question.  What does the Tooth Fairy bring a special needs child?  Whit lost her second tooth over the weekend.  When she lost her first one, she swallowed it.  (We think.) So Melanie and I were kind of off the hook.  But this time, we've got the tooth in hand.  And we'd like for Whitney to have a positive experience related to losing teeth.  It's been kind of traumatic for her so far.  We don't need to go into it too far but something about having a parent hold her mouth open and pull on her teeth doesn't sit well with her.

So to make things more positive, we're considering having the Tooth Fairy bring some candy or a bag of chips!  That'll probably seem pretty strange to most people but those are some of the things Whitney enjoys most.  At dinner, if she eats well, Whitney asks for chips instead of dessert.  And she's always digging through the diaper bag looking for hidden packs of Smartees, Pez or other crunchy candy.

So I guess that's what we'll try.  Should be entertaining to try and stick a bag of chips under a sleeping child's pillow.  No wonder the Tooth Fairy usually just opts for cash.

Have any of you other special needs parents out there been through this?  How did you handle the Tooth Fairy in your home?  I'd love to hear some of your stories.
Posted by Nate at 12:49 PM

I love the fact a father is blogging about his ill child. My father has always been a great friend to me having been ill since I was 15 months old, he was there making me laugh when I came round from surgery as a child and read Wind in the Willows to me pretty much every time even up to date when I had more surgery aged 33 haha. My parents spent years taking me to doctors and trying to make life normal for my other sibblings and me, sometimes they had to go and do active family days out which I couldn't do but I understood and we always had great times when they got back, would play board games, read books together and eat yummy marshmallows, toasted over a log fire so as an ill child I vote for nice picture book or sweets! Money is so dull, lets face it we can hardly nip out on a bike to go and buy ourselves sweets like our well brothers or sisters so I say always bring the store to her instead :o)

Hi Caroline! Just so you know we did opt for some treats for Whitney. Thanks for writing in. You are awesome!

my son is 6 and has down syndrome...I noticed yesterday that he has his first loose tooth. Any helpful tips to not scar him by holding him down and yanking on his tooth? Or tips for him to not swallow it? We are looking for a good book to read to him about losing teeth and hope that will help. He's also our oldest child so we havent ever dealt with this before at all! Thanks in advance

Hi Jaci, that's a great question. I wrote you a post specifically as an answer. Here's the link: http://raisingadisabledchild.blogspot.com/2012/11/on-loose-teeth-and-tooth-pulling.html

StevenHWicker said...
This comment has been removed by a blog administrator.
12:12 PM