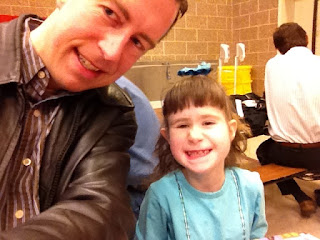 This morning, Whitney's elementary school hosted a special event before class.  Dads were invited to bring their students for donuts, milk and reading time in the cafeteria.  So instead of riding the bus, Whitney rode with me to the school.

When we arrived, Whitney and I found some donuts, some milk and a spot to sit and read her Disney Princess story book.  We looked at pictures of all of Whitney's favorite princesses.  Whit chugged her milk but refused to eat any donut.  So I did the honorable thing and ate hers after I finished my own.

We sat with a little boy in Whit's special ed class and her father.  Whit gave her little class mate a big hug as his dad explained that the two of them are pretty good friends at school.  This was a fun thing to learn since Whitney can't really tell us about the friends in her class.

Then before we left we saw that the school was giving away a free book to each child as a way to encourage kids to read.  Whitney and I perused the tables of books.  I suggested several and Whitney shook her head at each one.  Finally, I spotted Clifford the Big Red Dog.  I pointed the book out to Whitney.  She grabbed it and excitedly signed dog. She had clearly made her choice.  Whit's teacher told me later that Whit is a huge fan of Clifford.  They read about him all the time in class, so she'll love reading that one at home as well.

I enjoyed spending a some quality time my little lady this morning and I'm grateful for all the great programs we get to participate in at her school.  And I'm sure when I get home tonight I'll get to read Clifford with all three of my little book worms.
Posted by Nate at 8:18 AM

That is so fun! I love that picture of Whitney too, so cute! :)

Haha, you did the honorable thing- hilarious!

The tooth fairy post reminds me of Zoe's birthday cake. Every year we make her a cake that she refuses to eat. So last year, Gavin made a cake out of cheese and Zoe loved it! Cheese is one of her favourite foods. We haven't started discussing this years cake but I have a feeling it might be another cheese cake. It's either that or asparagus and that just does not make a very good cake!

I love the idea of a cake made out of cheese! Who cares about social norms. If we know what our children enjoy, why not let them have it. :-)