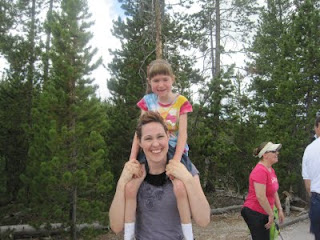 Many special needs children have behavior traits that make going out in public a challenge or even an embarrassment. It's not that parents of special needs children are ashamed of their children. In fact it's quite the opposite. But sometimes after bad experiences, it's just easier to stay out of the public eye and avoid the stares.
Whitney has an obsession with dogs that causes problems when we go out. We love taking walks or going to the park. But we have to decide each time we go out if we have the energy to endure the inevitable tantrum that comes when she spots a dog. Often, the dog owners we encounter are kind enough to let Whit pet their dog for a bit. But eventually we have to go home or the dog's owner does. This is usually when the uncontrollable fit starts. Often Whit will scream, throw herself down, hit herself and refuse to move. And once she launches into a tantrum it's very difficult to get her calmed down again. Very often I'll just pick her up and cart her home.
The tantrum is difficult but sometimes the stares of passers-by is even more challenging. And the experiences even get worse sometimes. Various 1p36 Deletion children, including Whitney, have episodes of poop smearing. This isn't something I've ever brought up before because it's extremely uncomfortable to talk about. I'm not sure what causes this behavior but I can say how difficult it is to deal with. And it's bad enough when it happens at home. But it can happen at school, church and other public places. In fact it happened at church yesterday. And before the shocked teacher's of Whitney's little class could locate Melanie, Whit had it all over her hands, dress and even in her mouth. If you're feeling queasy after reading that last bit, it's okay. Talking about this makes my stomach churn too. Melanie was able to get Whit cleaned up and people at church are patient, but dealing with the embarrassment is probably the most difficult part.
So what's a special needs parent to do? The easiest thing would be to give up and stay home. At least there we could hide some of the troubling behavior. But Melanie and I feel strongly that nobody in our family becomes a shut in. So we will continue to get out as a family and Whitney will continue to go to school, church, birthday parties and other things that typical children get to experience. We will persevere, but we're grateful for the patience of those around us. Our family is certainly unique, but we're determined not to get shut in, no matter the cost. We'll see you out walking in the neighborhood, at the park or at church. But don't worry, we'll bring plenty of hand sanitizer and baby wipes with us!
Posted by Nate at 8:40 PM

Oh my goodness, poor Melanie! That must be so rough. I can't even imagine; you guys are so strong to keep going and staying positive.

John Casper said...
This comment has been removed by the author.
6:13 AM

I agree with this 100%, you put in words exactly how I feel sometimes. Shay was doing this yelling/stuttering thing recently, and it didn't bother me really until she was doing it in public. People were acting weird about it and then it hit me that it was a behavior we had to help her to stop.
We have some pretty crazy poop stories too! It's funny sometimes, but most the time not.
It's such a learning experience for me with Shay. I have had to make myself become a more patient person.
We love Whitney no matter what!!!
Thanks for sharing!
Tressa

Thanks Heather and Tressa! It's good to know we're not alone in all this.

Thank you Nate for this post. Your feelings are our feelings too. You did a nice job writing this.

Thanks, Angie. I just wish I had a better solution for all the behavior issues so many of us are seeing. None of us wants to be Boo Radley but sometimes it just feels easier to stay home.

Thank you for posting about such a sensitive topic. I think you do a great job balancing talking about the many joys as well as the harder times in raising a child with disabilities. We all struggle with these things and although talking about it often does not lead to an answer, it is important to be able to talk about it.

Great to read your recent post about your trip to Yellowstone. Looks like you all had a great time. And it is great to see and hear about how well Whitney is walking these days. She is amazing!

Your other two are also very cute and it is neat to see them growing so quickly.

Thanks Genevieve! Sure hope things are going better for you guys. We think of you often and hope Zoe continues to regain her strength!

Oh I wish we all did not have to deal with these things. It does make life so interesting though. Taylor is starting to throw little tantrums when we are out. She stomps her foot yells no and folds her arms and makes it well known that she is very upset. As far as the other, I'm so glad that Taylor has her own bathroom as we never know what we are going to find in there. It is getting better but pooping is such an ordeal at our house and It is always a fun mess to clean up. Hang in there. Thanks for expressing all our feelings so well.

Firstly, I am so sorry that I have found you in my search for contributors to my book. My name is Katrina and I ask that you please take a look at my blog - it tells all about the book I'm trying to put together. I am trying to gather a compilation of stories from Mums and Dads that have at some point received the news that there is something wrong with their child. In the hope that, with stories of honest reactions we may help others that hear this news feel a little less alone. In advance, I thank you for looking at my blog and please feel very free to share it around. Thanks, Trine http://alittlelessalone.blogspot.com