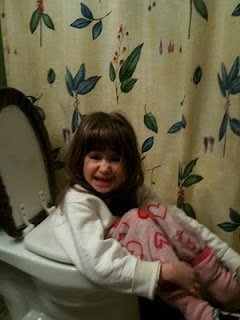 Our efforts to get Whitney out of diapers continue. We're not able to work with her on it all the time though. Melanie will focus intently on taking Whitney to the bathroom every 15 minutes or half hour for a morning at a time. Much more than a morning and everything else gets too neglected. But even just a potty-focused morning here and there has begun to make an impression of some kind on Whitney's mind.
One day this past week, Whitney was downstairs while Melanie was doing some things elsewhere in the house. When she went to check in on Whitney after a few minutes, the picture above is what she found. Whit must have felt it was time to head to the bathroom. But instead of going to find Melanie, she took matters into her own hands. When Melanie found her, Whit was stuck in the bowl, unable to pull herself back out but grinning with pride for having gotten there all by herself.
We laughed and laughed! We've still got a few things to teach her but certainly some of the potty training is beginning to sink in.
Posted by Nate at 12:32 PM

Glad you liked it. We laughed and laughed.

I am new to the site and I just love your posts. I too have a child with 1p36 and he is 8 years old. It truly feels like I am reading about my child when I read your posts. Thanks for sharing!
Felecia Hodges
Charleston, SC

Hi Felicia, thanks for stopping by. It's funny how similar all our 1p36 kids are. Thanks for sharing in our adventures. Little Whit blows kisses to her new friend in Charleston. Have a great day!

Oddly that brought tears to my eyes...you are the first family I have ever shared words with that has a child with 1p36...it is nice to know we have new friends out there that understand our lives...thank you from your new friends in charleston sc!!

Hi Felecia, I didn't know you weren't in the 1p36 Deletion group on Facebook or signed up with 1p36 Deletion Support & Awareness. There are tons of parents sharing and working together to help our children. We'd love to have you join. The Facebook group is at https://www.facebook.com/groups/1p36dsa/ and 1p36 DSA is at 1p36dsa.org. They host annual conferences and local get togethers. I help put together their quarterly newsletter which is available for download. Hope to hear more from you and your little guy!