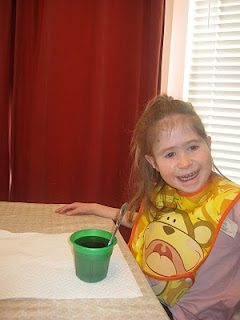 Whitney has worn hearing aids since she was about 18 months old. Melanie and I are glad she started wearing them so early because they've given her the best shot at early acquisition and use of language. Starting early has also made her more tolerant of having her hearing aids in for the duration of the day. We've worked hard to teach Whit not to touch her aids or take them out by herself. The few times she has, they inevitably get put in her mouth or left around the house for little brother to find. Whit's current aids have been carefully dried after water exposure a number of times.
We've also had experiences where a hearing aid has come out and been left somewhere. The most memorable was when Whit lost one at Melanie's grandfather's viewing. But up until last week whenever a hearing aid has been lost, it's always turned up unharmed in just a little while.
Last Thursday, the family went out for dinner and a little shopping. When we returned and Whitney was geting ready for bed, we discovered one of her hearing aids was missing. We searched the house and the car. We called the places we'd been that night to report that we'd lost a hearing aid. But nothing turned up. On Friday, Melanie retraced the steps of the previous evening and visited every place we went. Her thorough search didn't turn up anything.
Yesterday Mel talked to the audiologist to see what she recommended. I'm glad she did, because what we learned made me feel a little better about the loss. The audiologist recommended we wait a couple of weeks before starting to work on getting a replacement. She said sometimes even after that much time someone will turn it in to a lost and found somewhere or it will turn up around the house. So we won't lose hope.
She also told us that Whit's aids are over four years old and most hearing aids have a lifetime of around five years. In fact, we had insurance covering loss and damage that covered the first three years after purchase, but due to their age that coverage had expired.
Even if we hunted down the missing one, we'd likely be purchasing new aids for Whitney in the next year or two anyway. The audiologist cautioned that we not purchase one aid to replace the missing one. It's critical to have matching ones to provide properly balanced sound. And besides, if we purchased one new aid, the other might stop working soon anyway. And given the amount of abuse those things have taken over the last four years, I can believe it.
So we'll be looking between the couch cushions and waiting for a call that someone has found the missing hearing aid. But at the same time, we'll be doing some research on insurance coverage, hearing aid models and prices. That way we can get Whitney hearing well once more.
And you'd better believe I'll be dreaming up some way of tagging the new ones with our phone number or maybe even some kind of GPS tracking device!
**********
Whit had a great time decorating Easter eggs as you can see from the smile on her face.
Posted by Nate at 12:07 PM

We are about to embark on the hearing aid adventure with Zoe. After two years of debating and not being able to tell what her hearing loss actually is, we have decided to go ahead with a trial pair and see if it makes any difference. I am sure we will be looking to you for tips soon!
Good luck finding the missing aid, but perhaps like you have said it will be better to just replace it. When Zoe lost her glasses in the summer it was a real pain, but then we were able to purchase new ones that change with light and it has been much better for her eyes. So who knows, perhaps it is lost for a reason.
-Genevieve

I'm sorry Whitney lost her hearing aid. I agree with Genevieve that maybe there is a good reason for losing her aid. I always believe there is a purpose for everything. Have you thought about borrowing a pair of hearing aids from a deaf school nearby just to experiment different kinds of hearing aids before you make another big investment...just a suggestion. Our daughter Kaylee is in the process of applying for the parent/infant loaner program. I think this will give us an idea of what hearing aids work the best for Kaylee. We had 2 ABR's in the past, but our last one they lost the wave forms and her chart. The audiologist at Sunshine Cottage wanted to see the wave forms before she fits Kaylee with hearing aids. We are fustrated that we have to repeat the ABR. After dictation errors, lost waveforms and chart, we came to a conclusion that GOD is telling us something...so needless to say we are repeating another ABR soon. We are hoping it comes back normal this time...I know wishful thinking. Congrat on your little girl. We were so excited to find out...Whitney will be an awesome big sister. Can't wait to see you guys at the conference!

We've not quite officially been two weeks now since the hearing aid went missing now. So we'll be making full arrangements to get new ones. Whit did do the loaner program through a school for a year and a half. So I imagine we'll arrange to get her aids that are very similar to the ones she had. Thanks for all the encouragement. i hope Zoe and Kaylee are doing well in their adventures. :-)

I really love visiting this blog. I enjoy reading every adventure post. It is very inspirational and very fun to read.

I have a also mild/mod hearing loss in my R ear and a severe loss in my L. I was fitted with aids in Kindergarten, so I am used to wearing them and wear them pretty much all day.
bte hearing aids scottsdale az