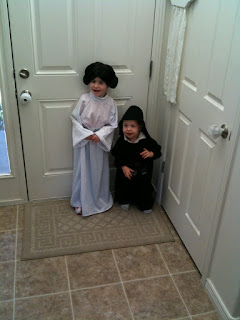 When Whitney started kindergarten back in August I was concerned about some of the advanced things that would be expected of her. Was her placement in diagnostic kindergarten really the best thing for her? Could she keep up?

Melanie and I got some answers at our first parent teacher conference with Whitney's teacher. And as it turns out, Whitney is making some good progress. She is much more attentive when instructions are given in class and no longer requires physical, hand-over-hand prompts to accomplish her tasks. She can hold a crayon or pencil with the tripod grip in order to do her class work and she's able to press harder with the crayons so you can actually see her work too.

She recognizes her letters and is even starting to trace the shape of some of them in her workbooks. She can complete some patterns. Like when her teacher shows her yellow, blue, yellow, blue. Whitney knows yellow comes next and then blue again and she'll pick up the correct crayon to go along with the pattern.

Numbers and counting really aren't Whitney's thing yet. Other than being able to point at numbers she recognizes, she doesn't do much counting or quantitative reasoning yet. But all in good time. I have to keep reminding myself that Whitney has accomplished all of this in between being pulled out for physical, speech and occupational therapy as well.

I'm really impressed with Whit's teacher. While kindergarten is a lot of coloring, singing and playing, her teacher sees it as teaching vital basic skills through the medium of coloring singing and playing. She expects quite a bit of her students. Not enough to frustrate Whitney most of the time. Just enough to keep Whitney working and progressing. By the end of the year she expects to see more progress on Whit's letter and counting. That would be terrific.

Whit's off track for a bit now, but her teacher even sent home a packet of things to work on during the break. And you can bet we will. It's encouraging to see Whitney continuing to learn. It's another reminder to never set limits for your child.

Oh and I almost forgot. Happy Halloween from Princess Whitney and Darth Liam!
Posted by Nate at 1:04 PM

That's great progress for her. Sounds like she loves school too. Taylor has a hard time with math and the concept of how many is 3 or 2 but also recognizes the numbers very well. Their costumes are very cute. Keep up the good work.