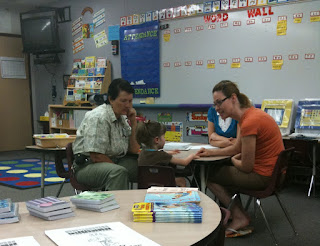 I went with Melanie and Whitney to Whit's kindergarten assessment this morning. The school is not too far from home and seems nice and new. Whit's new teacher is experienced and will work well with her. But I'm concerned. I'm not sure Whit's in the right place for kindergarten.

I felt like the testing didn't go well at all. First up was placing small toys on a grid and counting. Whit didn't even get the purpose, she wouldn't do what they wanted and she certainly can't count. Whit didn't really give the teacher and her aide the attention they needed. Melanie and I snuck out into the hallway so we wouldn't distract her.

While Whitney was alone with her teachers in the classroom, they tried to get her to identify the letters of the alphabet. A few minutes into the test, the teacher came out into the hallway and asked or help, "We're just not getting anything out of her."

Melanie stepped in to help and managed to get Whitney to sign a few letters. Whit was willing to identify and pick up a few plastic toy letters when her teacher asked her to. We were told that identifying upper case and lower case letters is a kindergarten skill, so hopefully Whit will improve over the school year.

It took a half an hour of work to get through 10 or 15 letters and Whit kept signing "all done" throughout the exercise. After that, we just talked with Whit's teacher. She felt the rest of the tests weren't really necessary based on what she'd seen.

So Whitney will be starting out as the most delayed member of her kindergarten class. Many of her classmates, mostly autistic children, can already walk, talk, write their name, use the bathroom and various other typical skills. I guess you could call me concerned about that. I'm hoping most of the struggle today was new people in a new place. I think Whitney will calm down and do well once she's there with the other children during class time. But can she learn as quickly as she's expected to? I hope she'll give it her best shot. And in the mean time, I'm expressing my father's right to worry.
Posted by Nate at 12:27 PM

I worry about the same things with Shay. I think she will do great! Just focus on her IEP goals, she is awesome!

Personaly, I believe it is because it was a new classroom and teacher! We will see what happens!

My son is also in an autistic classroom with 7 other students. While he is the most delayed in his class and last year kindgergarten was terrifying (for me) he did great. They were patient with him and went at his own pace & even though he isn't nearly as advanced as the other kiddos, it was okay for him. Remember, it's all about what she gets out of the experience. Good luck!

I feel the same way about about Zoe. She just started in the preschool class at her daycare. She knows her teachers well and they know her. There is one other special needs kid in her class but she is miles ahead of Zoe, at least physically and expressively (although Zoe yelled at me continuously for the 15 minute walk down the hall to her classroom today- what a great toddler attitude!). But every now and then I get a panic attack, thinking of Zoe entering the school system and what that is going to look like and if the system can accomodate her and her unique style. I guess all we can do is hope.

If you ever want somebody to talk to about this stuff drop me a line- I'd welcome the chance to share these worries. Man, this fatherhood stuff is tough! :)

Thanks, Gavin. It's good to know other dads go through the same stuff. I guess we always want what's best for our children. And we probably all second guess our decisions sometimes.

Hey don't worry it will come for her and she will settle in after she is used to everyone. She sounds like she is doing great.

Hey Nate what's the trick to me being able to have you list Taylor's blog link on yours too?.
http://taylorsadventureswith1p36.blogspot.com/

Hi Jenny, thank you for the reassurance. Things this at school this week have gone better. I'll post about it soon. I've added Taylor's blog to the blog roll on the right. Now each time you update it, the new post will rise to the top of that section on Whit's blog. Thanks for sharing the address. I'm excited to read more about Taylor and how well she's doing!