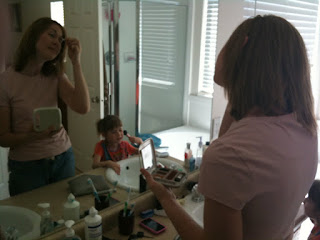 It's been nearly two months since Whitney's surgery to insert tubes that allow her inner ears to drain. In that time we've noticed some remarkable changes occurring. Whitney has begun vocalizing again. She's done this a bit in the past but for the last year or so, she's been pretty quiet. That's changed now.

What I love best about her new found ability to vocalize is that it's what I would call social vocalizing. She's not just saying, "aaaaaaaa." She's doing it in response to something Liam says. Or she'll make a sound. Then I'll match the sound she made. Then she'll make the same sound back again.

It's really starting to give me hope that she'll be able to speak one day. Melanie has begun working with Whit using our Z-Vibe again. This should give her more sensation in her mouth for forming actual words one day.

Melanie and I think this progress in vocalizing is due to actual improvements in hearing that are likely the result of her ears finally draining. It may also have to do with Whitney's brain better understanding what to make of the stimulus her ears are sending it. This is based on what Dr. Perszyk has studied and shared at conferences.

But whatever the reason, I'm hopeful that better hearing and maybe even speaking will someday be in Whitney's future.

Also, Whitney has learned to apply makeup by studying her mother's expert hand. You can see her in action in this post's photo. She may not say a whole lot yet, but she's very observant.
Posted by Nate at 9:33 PM

Oh how wonderful! Seems to make complete sense..a lot of kiddos who can't hear well don't talk! And what a beautiful young lady she is!! Growing up so fast =)