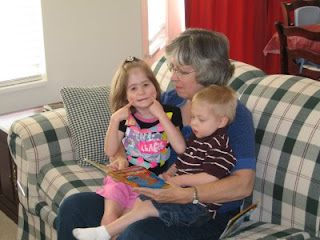 Thanks for everyone's thoughts and prayers after our episode with the doctor's earlier this month. I've got good news to share this week regarding Whitney's medical care. We've left the other ENT, hospital and anesthesiologists behind and returned to the children's hospital where Whit has had her previous surgeries.

Yesterday, Melanie and Whitney had a visit with ENT number three and were very impressed. He agreed that Whit could use a new pair of tubes to help unplug her inner ears. He also asked if she sometimes sounds like her breathing is labored and kind of "snorty." Melanie explained that Whit's breathing has always been that way.

The doctor explained that she likely has sleep apnea as well caused by plugged up sinuses and if we take her Adenoids out it should help with her sleeping too. So one procedure will help our little girl get over ear infections, sinus infections and poor sleeping habits? Where do I sign up?

As it turns out Melanie, took care of that part too. In late June, Whit will go in to have everything taken care of in the children's hospital here in Salt Lake. She should be well enough to travel after a couple weeks which means we'll still be able to make the 1p36 Conference at the end of July. Best of all we'll have a happier, better rested little girl.
Posted by Nate at 5:19 PM

This is great! Kole had his adnoids removed and ear tubes put in at the same time when he was 6 months old. He did great and was so happy ater a few days. Just a warning. Her breath will be pretty bad. Use the drops they give you so you don't have to smell it! We will be praying all goes well.
PS. tell Mel I got her message and I will try to give her a call this week end.