What Did You Do at School Today? 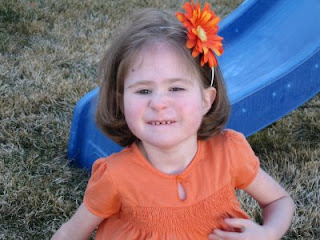 Each day when Whitney arrives home from school on the bus, Melanie welcomes her and asks her what she did. Usually Whitney motions wildly with enthusiasm. We interperet this as "I had a good time." But it doesn't get more specific than that. We've never once gotten a response like "I did this or that specific thing."

That doesn't stop Melanie from trying to get more detail. Yesterday, Whit got home and Melanie asked, "What did you do at school today?"

Whit thought for a second and signed, "Bear."

Melanie praised Whitney for responding even if the answer didn't really make all that much sense. At least she's trying, right? But then Mel got Whitney's daily update note out of her backpack. On one line the note said, "Today I played with bear."

Sure enough. Whitney had actually answered Melanie's question. She had enjoyed playing with a stuffed bear during play time at school that day and told her mother about it. Communication, even about such simple things is so wonderful. And now that we've had a bit of a breakthrough, you can bet that we'll be continuing to ask about Whitney's day every day after school.
Posted by Nate at 9:33 PM

That's so awesome!!! This is so neat for you guys- and what an adorable pic of Whitney!

That is so great! You guys do such a great job with her. I can't beleive how old she is getting. Great picture!

How exciting! That's incredible for her AND for you guys - I hope she continues and progresses!

She is amazing. What a smart, precious girl.

Woo Hoo Whitney...so proud of you! You guys must be pleased as peacocks!

I needed a smile! Thank you Whitney! How wonderful!

Way to go, Whitney! Keep up the awesome work!

I am so proud of Whitney. She is so smart. WOW everything is possible for those who believe. Kisses from Alisha.