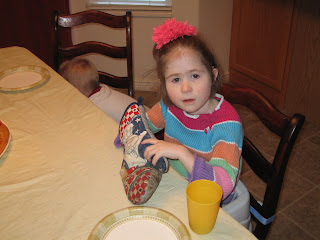 Yesterday afternoon Whitney was tested for kindergarten placement. We had discussed with Whit's teachers what they felt will be best for her this coming fall. But she's got to score appropriately on the tests to qualify. So her teachers, and a child psychologist met with Whit for the assessment.

Many of the tests were listening comprehension oriented. Whit scored well on simple exam questions like, "Where is the bear?" She's been playing these kinds of games for years.

But she struggled with more complex instructions. Especially ones that required imagination. Such as, "The bear is hungry. Can you feed the bear? Bear is thirsty. Can you give bear a drink."

The expected response was picking up a spoon or cup and using it to feed the bear or give him a drink. Whitney didn't understand.

The child psychologist said Whit had good pre-reading skills such as being able to pick out her face in a class picture or being able to pick out certain letters and numbers. However, she doesn't understand when someone asks her to pick all the green objects out in a picture. That seems to be a different skill entirely.

Next it was pattern matching. Where Whit had to put a card in place to complete a sequence. For example, two cards with circles on them were placed next to each other. Then one card with a square on it was placed below the cards with circles. Whit didn't understand that she needed to place another card next to the square card to complete the pattern of two circles and two squares. No biggie though. I'm guessing that's a pretty advanced topic for most kiddos in special needs preschool.

Overall, I'm mainly happy to find out more things we can work on to help Whit prepare to do well in kindergarten. The folks from the school district will be looking over the test results and coming up with a placement recommendation. They'll present us with their findings later this month.

I certainly hope that Whit placed high enough to qualify for a place in a diagnostic kindergarten class taught in a school with typical kids. I really want her to be around a variety of children with a wide variety of abilities. I'm having difficulty with the idea of sending her off to a special needs school with no typical kids around to see and model. But in the end, I just want what's best for Whitney and I'll be glad to send her wherever she will receive the best education.
Posted by Nate at 4:27 PM

Good luck Whitney! We will be thinking of you guys. We have an awesome program at our school where the kids go to their homeroom class for the first couple of minutes, and then go to their awesome little class to learn. It sure teaches them a lot as well as the cute little kids. We will be waiting to see what happens. We love you cute Whitney- Clayson asks about you all of the time!

Thanks for continuing to post about Whitney's progress as well as the kindergarten process. It is extremely helpful for us to learn what to expect and prepare for a year from now with Brady.

It's amazing how similar our kids are with respect to the areas Whitney excelled in and the areas in which she needed more practice. I hope that the school district will consider your preferences when evaluating the best fit for Whitney. Keep up the great work!