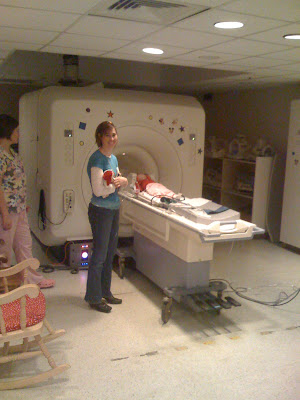 Melanie, Whitney and I reported to the local children's hospital for another test on Monday. I wrote about our concern over a tethered cord a while back. So this trip was to get a good look at Whitney's lower spine and make sure its structure looked healthy.

The check in process was short and so was the wait. Whitney got pretty upset as the nurse took all her vitals and started an IV. But Whitney was given a stuffed polar bear in a Santa hat that mostly made her feel better. After another short wait the MRI tech came to get us.

The nurse gave Whitney some Nembutal and she was out like a light after about 5 minutes. The tech and the nurse strapped Whitney to the table and slid her into the MRI machine. Melanie and I stayed in the MRI room to watch as the scan was done. Make sure you've got some earplugs if you ever do this. MRI machines are loud! Luckily the scan itself only lasted about 20 minutes.

Then it was off to the recovery room. Only one parent was allowed bedside while Whitney slept so I had to find some other place to wait, but Melanie stayed closeby. There were lots of other moms and children in the recovery room so there was some impromtu support given between them all. And lots of "Hey, I've never heard of 1p36 Deletion Syndrome before." It was good to spread some more awareness.

After two hours, we were instructed to wake Whitney up so she could have some juice and crackers before being discharged. Whit was still out cold and she got increasingly cranky as we worked to get her conscious. By the time she opened her eyes, she was in no mood to take a drink or eat anything. And they needed the bed for another patient. So we gladly loaded Whitney into a wagon and headed for the door.

Our discharge teaching told us that Whitney would be groggy and have poor balance for the next 24 hours. And that was no exaggeration. She slept all afternoon and refused to eat anything the rest of the day. We did get her to take some Gatorade before bed. But she was cranky and wobbly when she tried to crawl. Thankfully by the next morning she got the medicine out of her system and she felt like her old self again.

Yesterday, Melanie called the pediatrician who had ordered the spinal scan to get the results. They were swamped but a nurse called back to let us know the scan came back normal. That means no tethered cord and no surgery. Whitney will still have to deal with low muscle tone and difficulties with balance, but there isn't anything else to physically keep her from learning to run and jump with all the other children. I guess you could say that Christmas came a few days early for us. And we're very grateful.
Posted by Nate at 10:27 AM

WOW I am so happy everything came out good. Better safe than sorry. Merry Christmas and love reading your Blog.

I'm so glad the results came back normal- Melanie had told me what the MRI was checking for, and I have been wondering how things turned out. I've found it can be frustrating sometimes to not understand why your child is struggling in a certain area, but getting a normal result is so much better than what could be. So, some day Whitney will be running around with McKinnon and the rest of them.
Merry Christmas!
Tina

I am so happy for Whit! Another early Christmas gift!

I had lots of catching up to do!I'm so glad to hear that her heart is good and no tethered cord. Wonderful news! And Whitney has a big birthday coming up and I was actually thinking about kindergarten for her the other night. It is so nice to have so many options where you live and I'm sure you'll pick the best one for Whitney as you know her wants and needs. We think of all of you often. Thank you for your continual updates on the blog. They are always written in such a positive tone and in a way that my family can read and understand them too. I hope you guys can make it to Indy this summer. We hope to see you there.

I saw your blog from a friend of mine an when I saw this post it hit home for me, my son has a tethered cord and had it released at 4 months and as well has extreme low muscle tone and a few other conditions....as I read your blog it brought tears to my eyes, you are a brave mother and inspiration, my son is now 3 and just started walking by himself. Thank you for sharing your experiences!