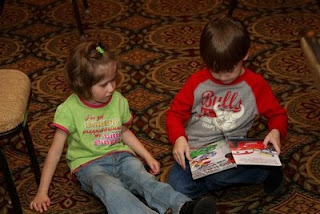 Whitney and Kole looking at books during the 1p36 Conference in Boston
Hopefully, you're sitting down for this one.  Melanie and I got a pretty big shock toward the end of our stay in Boston.  We were sitting on the subway doing our best to entertain Whitney on the way back to the hotel after a long day of touring around town.  Melanie had her new 1p36 Deletion Syndrome bracelet on and Whitney kept pointing to it.  After watching her for a bit we realized that Whitney was not just pointing at the bracelet but at the words.
For fun Melanie started pointing out individual letters and saying their names.  Then she started asking, "Whitney where is the M?  Whitney where is the D?"  And Whitney would think for a second and point to the appropriate letter in the words on the bracelet!  We tried this trick with the T-shirt I was wearing that day and Whitney once again pointed to the letters we asked her about.  We were so amazed and shocked!
The next shock came as we met with Brett, our deaf mentor last Saturday.  Whitney was at the table during the lesson and we tried to show him the "where's the letter" trick.  But Whit wouldn't point to the letter we were asking her to.  We tried a few times and then it dawned on us.  This time she was pointing to a letter and trying to make the ASL sign for it!  She was trying to tell us what she knows.
At this point you're probably asking the same thing Melanie and I did.  How does a child who has so many developmental delays possibly learn her alphabet without her parents knowing it?  Whitney loves books so she's been exposed to the alphabet there.  And most of her Signing Time DVDs run through the manual alphabet at the end, so she's seen it there.  This must be where she's picking this up from.  I know they're not working on the alphabet in special needs preschool yet.
Now, she doesn't always get the letters correct, and she recognizes capital letters much better than lower case ones.  But it is such a great gift to see Whitney's inquisitive little mind learning things without help from therapists and doctors.  She loves showing off her new trick and I am fully convinced that little Whitney will one day be able to read all by herself.  What an amazing surprise!
Posted by Nate at 9:18 AM

Wow - I got the chills reading this. Whitney is one smart girl and I am positive she will learn to read!
We have had similar experiences with Brady understanding PECS lately and we certainly didn't teach him any of it. These kids!

That's amazing! I love the inspiring things I read about Whitney. I can only continue working with Ava and praying she meets these awesome milestones.
-mel mom to Ava and Drake

She's Brilliant! What great work you're doing with her!
-Heather Olivia's mom

Wow, I am constantly amazed by Whitney (and you guys). I think all of our kids are capable of so much more than we think.

That is so neat! I can't wait until Alayna can do something like this. And I'm glad to hear that she enjoyed the conference and touring of Boston as much as you guys did. Way to go Whitney! We will definitely see you guys at the next conference if all goes well and we both can get there.

Thanks everyone! Melanie and I are shocked and so happy too. We met Callie and Mollie last year and loved seeing how capable and independent they are. I guess it's still sinking in just how independent and intelligent our children really are!

That is sooo AWESOME! I'm soo happy to hear the wonderful news! I'm so proud of her! This is so huge! Good for you guys!

My God Whitney is so full of surprises. She is always amazing me. God bless her. What a smart cookie she is.