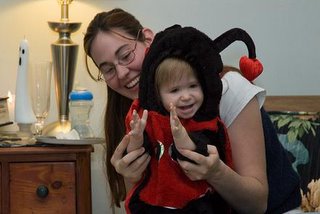 My daughter is approaching two years old. It seems like looking back on posts about the last year, that there have been times when progress was painfully slow or non-existent. However, lately it really feels like things are picking up. My daughter has been getting more mobile all the time. She still isn’t getting up on her hands and knees by herself very often, but she can do it. And when there’s something out of reach that she wants, she’ll scoot over to get it. My wife even had to tell her to leave the buttons on the VCR alone. That’s something a parent of a typical child would have to do.

On the eating front, there have been some recent improvements as well. Her appetite is increasing and she’ll eat many foods without having them ground up. She loves all kinds of different pastas, Pringles, chocolate and all sorts of stuff that most kids do. Her chewing is coming along very well. There are still times when she won’t swallow things, but it’s bearable. Last night she put a whole piece of pepperoni in her mouth and tried to chew it up. She ended up spitting it out, but the fact that she tried is great progress.

Communication is still pretty limited. We’re trying to get her to sign what she wants when she asks “more”. But at least she’ll sign more.

My wife and I have a couple of big goals for our daughter coming up. We’re hoping she’ll be crawling by her second birthday in January and we’re hoping she’ll finally weigh twenty pounds. Right now she only at about 17.5 lbs. So there’s plenty of work to do, but it’s so nice to see some more progress.