Milk and Peek A Boo

My daughter threw me a funny curve the other day. She's been picking up new signs here and there and beginning to use them. My wife and I have been trying to teach her "milk", her favorite drink, and "drink". The sign for "milk" is made by squeezing your hand as if milking a cow and the sign for "drink" is made by tipping an imaginary cup to your mouth. So the other night I was feeding her and she mixed the two signs by squeezing her hand by her mouth.

I thought at first she was signing "food" or "eat". But when I offered her another spoonful of dinner she gave me the "duh, Dad". look and shook her head. My wife explained that she thought our little one was mixing signs and wanted a drink of milk. I scoffed, but offered the cup anyway, and my daughter's face brightened. Sure enough The official sign for "drink of milk" in our house is to squeeze your hand in front of your mouth. The developmental specialist says combining signs is normal and that's good enough for me. It's just fun to have her increasingly more able to express her needs and desires. 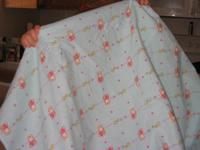 The other cool thing my daughter's doing lately is something most parents got to do with their kids at six months instead of nineteen months, but that just makes it all the more fun. If you give my daughter a blanket, she'll take it in both hands and hold it in front of her face. Then she'll lower it and smile at you, then raise it again. Finally after all this time, she's learned to play Peek A Boo. She has to have her audience say Peek A Boo for her, but she still thinks it's a wonderful game. It seems like each and every day she picks up something new. As a parent it's such a joy to watch her progress. 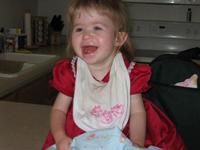